Justin Straussner tipped the scales at over 10 pounds at his first weigh-in, “So I was destined to be either a Sumo wrestler or a strength athlete,” he quipped, but it’s no joke because he just certified on the IronMind Red Nail™. 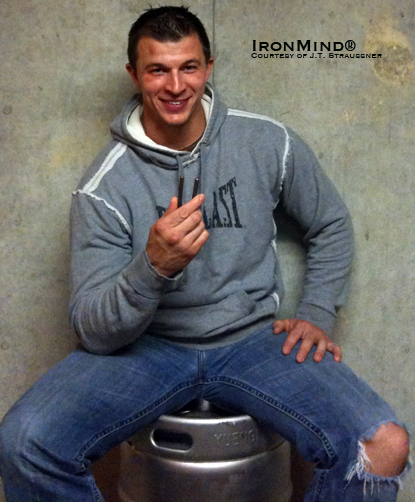 Justin “J.T.” Straussner is used to amazing people with what he can bend, and now he’s added a big notch to his belt as he has officially bent the IronMind Red Nail™.  IronMind® | Photo courtesy of J.T. Straussner.


Since he’s a pipe welder, JT said he get plenty of opportunities to parade his strength in front of guys who while far stronger than average, can’t come close to keeping up with him on things like closing grippers or bending steel.

Traveling for work and erratic hours don’t keep JT from training: “I always have a keg, kettlebell, Fabled Cables and of course nails with me my hotel room so there is not excuse not to train.”

At 27, with his talent and enthusiasm, the future holds the promise of a lot more PRs for JT, but in the meantime, congratulations on your latest success — your name has been added to the Red Nail Roster.

Many thanks to Craig Covington for serving as JT’s referee on his official attempt to bend the IronMind Red Nail™.