Off to a perfect start in the Masku Giants Live Finnish National Strongman Qualifier, Juha Matti Järvi won the second competition in the four-contest series last weekend in Masku, Finland. 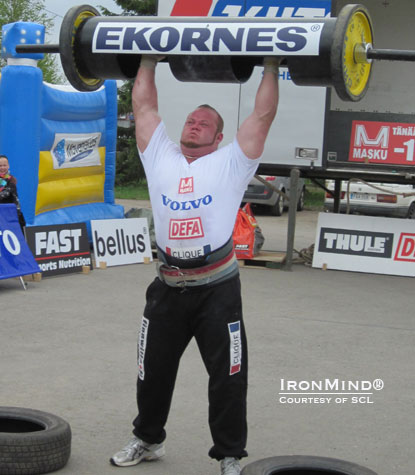 
“The competition started in nice sunshine,” Ilkka Kinnunen reported to IronMind, “which brought a full stand [of spectators] to watch the best Finnish strongman athletes compete in five different disciplines.

“The first event was the Truck Pull with harness and rope, this time on a flat surface, and the top two were Juha Matti Järvi at 19.90 seconds and second was Topi Frifeldt 20.35 seconds.  Frifeldt  was third in last year’s under under 105 kg Strongman World Championships.

“The second event Log Lift for reps where the athletes used 130-kg Giant Log.  Juha Matti Järvi was again the best, with a result of six reps, and second was Topi Frifeldt with 5 reps.   The third event Farmer’s Walk on a 40-m course and the weight for each Farmer’s case was 130 kg.  Juha Matti again showed his strength with atime of 21.78 seconds.   Kai Pasanen was seconds (24.59 seconds).

“After a short break, the athletes hit the the two last events.  The first of them was Sack Loading, with five sacks; the weight each 100 kg and it was a 5-m distance for each sack.  Juha Matti Järvi loaded the fastest onto the 145-cm high platform, with all five sacks in time 31.19 seconds.  Second was Jarno Kirselä, at 31.34 seconds.  The last event was the 300-kg Deadlift for reps.  Kai Pasanen won with 8 reps; second equal with 7 reps were Harri Peltomaa and Jarno Kirselä. Juha Matti Järvi did just one rep, because he had enough points already to win this second round in the Masku Giants Live Finnish National Strongman Qualifier," Kinnunen said.

Here are the top five:

The tour continues already this week, on Wednesday in Jyväskylä.