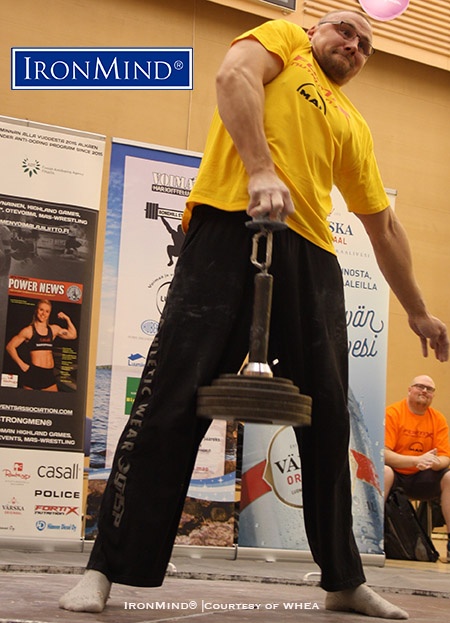 The WHEA Finnish Grip Nationals had a solid turnout and performances that included not just one, but two men breaking the world record on the IronMind Hub.

The competition started with a speech by the chief of the commune and after that the event started in front the audience and we witnessed some great entries by some newcomers of the grip field in Finland,

After a small break it was time to make some real records as IronMind Hub has always been a good event for Finns and this time we saw the thing we have been waiting for: a world record!

Others did also great results, but in this event the day belonged to Jouni Mähönen and Harri Tolonen as at first Jouni Mähönen broke the former world record with good lift of 39.90 kg, but his joy was not long as the newcomer Harri Tolonen first tied Jouni's kilos and then became the first man in history to officially ift over 40 kg on the IronMind Hub...now the new record is written with the numbers of 40.90kg!

The good numbers continued in the fourth event, which was IronMind Block.  The ladies started with new Finnish record (23.15 kg) by Anu Rytkönen and the men followed as far, that Mähönen and Joronen did 43.40 kg and Pynnönen and Tolonen nailed 44.65 kg and they also gave a shot for a new world record, but this time 47.6 kg was a little too much.

After 4 heavy events it was time for last crushes as we put the CoC Silver Bullet Hold to the athlete's hands. We witnessed brave attempt for a world record with the Captains of Crush No. 4 gripper from Mähönen, Lehtimäki, Tolonen and Tuomi, but only Tuomi was able to make a time with it (4.82 sec). With the CoC No. 3,  the times were between 2-30 seconds, which was understandable after 4 events.

The organizing team was Bonehill Strongman led by Arto Joronen and his crew did an excellent job as they ran the show smoothly. The events were judged by WHEA Chairman Jyrki Rantanen.

Here is the link to the video of Harri Tolonen's world record on the IronMind Hub.

Here are the the final results: