He won the World's Strongest Man contest twice and remains highly involved in strongman, but along the way, Jouko Ahola got into movies, and he's is about to start work on his fourth. 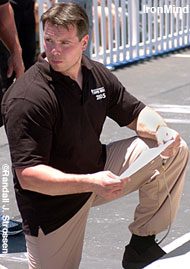 In 2005, Jouko Ahola returned to strongman in a big way as he managed the equipment for the World's Strongest Man contest. Ahola's personal equipment was standard fare at major Finnish strongman contests for years, but he dismisses it as basic compared to things Jamie Reeves has designed, such as his barrel-loading squat machine. "It is because of him [Jamie Reeves] that I am the equipment manager [at the World's Strongest Man contest]" Ahola told IronMind®.

Ahola said that he very much enjoyed doing this work last year, praising the TWI team and noting how much he liked being around all the new faces in strongman, "seeing the young guys who are so hungry," he said.

Ahola is leaving shortly for Vilnius, Lithuania to begin work on a movie about the Winter War, which was between Finland and Russia (1939 - 1940), and features Hitler's quest to make the perfect soldier, who happens to be a zombie.

Ahola said that he is "training a little bit" because he wants to be in good shape for this movie. "I am training pretty much like I used to in the gym, only a little more like bodybuilding." Did we mention that he can still deadlift a little over 300 kg. "It can't come down to 200 [kg]," Ahola said, "if you have done 400 [kg]," which he has. Front squats and a lot of overhead pressing are a big part of his training, the latter because Ahola said he is always lifting people over his head in this movie.

Continuing with his home-restoration business, too, Ahola describes himself as "very happy," and the respect given to him and his popularity speak volumes for his stature in the sometimes fractious world of strongman.