“I recently decided to make the move over to Olympic weightlifting from strongman and I have quickly become obsessed with it,” Josh Thigpen told me, and then he asked about some of Hossein Rezazaeh’s lifts. 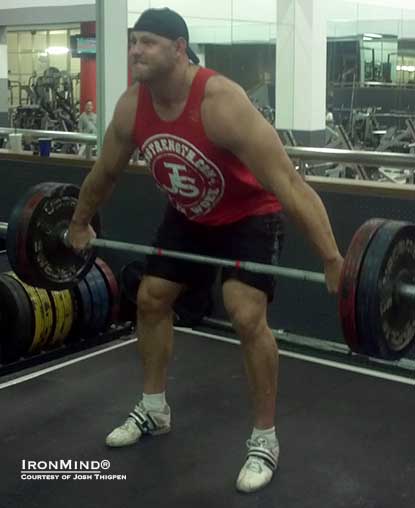 Professional strongman Josh Thigpen has switched his focus to Olympic-style weightlifting: “I will always love strongman but at least for the time being I am putting it aside to focus on Olympic lifting . . . We’ll see what happens!," he told IronMind.  IronMind® | Photo courtesy of Josh Thigpen.


I relayed some information about Rezazdeh’s huge power cleans and asked Josh some more about his own lifting.

“For now at least, I am stepping away from strongman and I have fallen in love with Olympic lifting,” he said.

“The technique is frustrating to learn, but I am enjoying the challenge.  I plan on hitting my first meet sometime this summer.  I like that there is drug testing, and although guys get around it at least there is testing in place.”

Josh Thigpen has competed in the World’s Strongest Man contest three times (and qualified last year, but ended up not being able to compete due to an injury).

“As far as Olympic lifting goes this is kind of an experiment.  I think I will be the first pro strongman to try and make the switch.  There has been some guys switch over from Olympic lifting to strongman (Misha, Jason Krystal) with great success, but not the other way around.

“My ultimate goal is to make the Olympic team in 2016.   Some people think I am crazy, but they don't understand my work ethic and how obsessive I am.  I am not delusional enough to think that I will walk into the sport and dominate right away.

“I understand the work I have ahead of me, but I will train all day everyday if I have to. I also have a lot of faith in Christ, and if It is the Lord’s will it will happen,” Josh told IronMind.