Recently, a crew from the Today show filmed John Brookfield for two days, and the resulting show is set to air on December 28th. 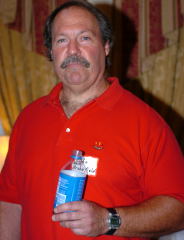 
John Brookfield first appeared on the Today show shortly after his book Mastery of Hand Strength came out in 1995, and in this latest program, viewers will have a chance to get a little better sense of John as a person, as well as be dazzled by some of his feats of strength.

IronMind® is proud to have been closely associated with John Brookfield since 1990, and we credit John with being one of the trailblazers most responsible for the current interest in grip and lower arm strength. Mastery of Hand Strength, has been inhaled by grip strength fans around the world, and countless people have been inspired by John's example and benefited from his direct help.