The guy who put a whole new slant on high-level gripper training and accomplishments is scheduled to do his first seminar early next year. 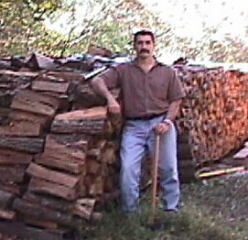 Besides being on the cutting edge of grip training, Joe Kinney would be our first pick any time we needed help splitting firewood. IronMind® | Photo courtesy of Joe Kinney.

Joe Kinney, the first man certified for officially closing a No. 4 Captains of Crush® gripper, brought the grip world a number of significant innovations. For example, before Joe Kinney, we had never heard of anyone doing negatives as a way to excel on grippers, nor had we heard of anyone training so hard on grip stuff that he bled under the fingernails, nor did we know of any grip specialists who saw heavy high-rep squatting as a building block for greater hand strength.

Joe Kinney lit a fire under the grip world, and in January he's scheduled to lead a seminar at the University of Tennessee, and we would guess that someone had the idea that if he can't teach the football team how to boost their hand strength, maybe there's nobody who can.

Along with his benchmark performances, Joe Kinney has already established himself as a significant force in the field of grip-training education: along with Randall Strossen and Nathan Holle, Joe Kinney wrote the book Captains of Crush Grippers: What They Are and How to Close Them, and in our opinion, his grip training video remains in a class by itself - if you haven't already bought a copy, we highly recommend it. The video is $25 plus $6 S&H in the US ($12 S&H for all others), payable by money orders only, and you can get it from: J. B. Kinney, P.O. Box 32, Bean Station, TN 37708.