Congratulations to Jim Ricchezza and Mike Krahling, who knocked off the IronMind Red Nail under official conditions and are now certified. 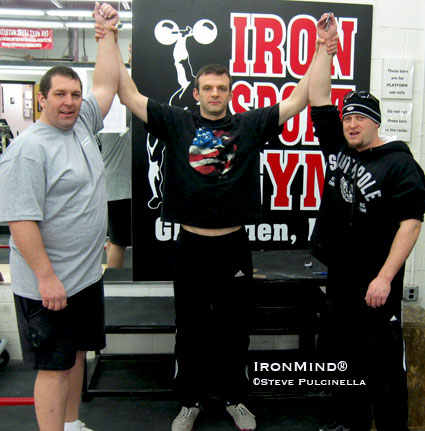 
Teaming up with official Sean Burke at Steve Pulcinella's IronSport Gym, first Jim Ricchezza laid into the piece of steel that separates the men from the boys, and Jim won the battle. Next up, Mike Krahling followed suit, so as far as the IronMind® Red Nail™ goes, this was double trouble and both men succeeded on this benchmark short bend.

Jim Ricchezza said that besides continuing with his steel bending, he's going to "move on to the CoC grippers and see how far I can go with them," and we predict that the distance travelled will not be short.

Mike Krahling has only been bending short steel for "for about 4 - 5 months," but he has "been training with kettlebells for the last 2-1/2 years under the guidance of Brian Petty RKC." Mike says the strength from his kettlebell training combined with Jim Ricchezza's coaching on bending technique is what led to his success.

Congratulations, gentlemen - you have just been certified on the IronMind® Red Nail™: Your names have been added to the Red Nail Roster®!