Going into the final day, "only two events remained in the contest: the car deadlift hold and the medley," reported Dr. Sam Dube, and what was one the line was the title of North America's Strongest Man. 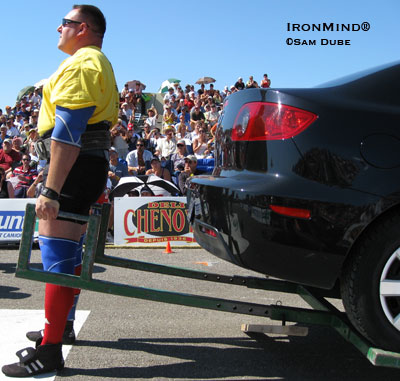 Jessen Paulin hangs on in the car deadlift, on his way to winning the 2008 North American Strongest Man contest. IronMind® | Sam Dube photo.

Only two events remained in the contest: the car deadlift hold and the medley. Measuring 720 pounds at the handles and with wrist wraps allowed, Eastern Canada's Strongest Man Grant Connors set the standard in the former with a grueling 1-minute 21.04-second performance, which was not eclipsed until Grant Higa's superhuman 1:26.45 effort.  Christian Savoie, hanging on for dear life, impressed with a time of 1:10.54, but current contest leader and defending champion Jessen Paulin succeeded in his strategy to keep The Butcher at bay by besting this by 5 seconds, earning him third in the event next to the Higa Monster and Connors.

With respect to strongman contests, I'd like to say that "the show ain't over until the chain hits the ground."  In this case, it was the 600-pound marine chain that ended the three-part medley event, the first two parts being a 950-pound tire requiring one push and three flips, and a 750-pound car engine yoke carried for 50'.  The chain, by the way, needed to be dragged 100' and the whole event completed in 75 seconds or less.  With the loss yesterday of the injured Jose Plante, the odd number of athletes required Higa to go it alone while the remaining pairings made for some interesting match-ups.  Canadian Maritimers Dany Frame and Connors went head-to-head, with the former Toronto Argonaut Frame edging out the latter and setting the distance to beat, as no one could complete the chain drag and thus the course.  With only half a point separating Western Canada's Strongest Man Matty Parkes and Texan Josh "The Natural" Thigpen, their placings would be a direct reflection of the result of this pairing.

Unfortunately for The Natural, and sadly, reminiscent of his bad fortune in the log lift, his yoke toppled over when put down, and he lost valuable time to Matty by having to upright it.  Tied at 51.5 points apiece, Ryan "The Trooper" Bekke of Arizona and "Handsome Pete" Konradt of Wisconsin took off like bats out of hell, with Konradt eventually pulling ahead and ultimately becoming the man to beat in the process.  The two relative newcomers demonstrated superior strength athleticism throughout the weekend, and I'm certain we will see much more of them in the future!

With a 5-point deficit in the overall standings, the pressure was on Savoie to blast through the medley and beat Paulin by as wide a margin as possible.  That, and pray that Paulin make some dreadful error.

But it was not to be.

Despite tearing through the tire and the yoke and dragging the chain the farthest of all, Savoie was unable to close the gap. Paulin, with a powerful and methodical performance so characteristic of his strongman career, paced Savoie and placed second in the event, thus securing the overall victory and becoming a two-time North America's Strongest Man.

At the end of Day 3, the final points and standings are as follows:


Editor's note: In the Clark Kent-side of his life, Dr. Sam Dube is a math professor who recently started medical school, looking to add the letters M.D. to the Ph.D. that already distinguishes his name, so why wouldn't you expect him, in his Superman role, to announce a strongman contest, report on it for IronMind® and also manage to snap a couple of pictures? Un homme de beaucoup de talents, merci beaucoup, Dr. Dube!