He told IronMind®'s Randall Strossen that he wanted to be the first strongman to make the cover of a major bodybuilding magazine, and while California Governor Arnold Schwarzenegger bumped him for photo honors, Jesse Marunde did get his name on the cover of the just-released August issue of IRONMAN magazine. 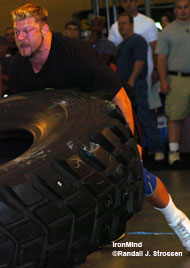 Some guys flip burgers and some flip tires: The ever-effervescent Jesse Marunde is expected to be a favorite in the 2006 MET-Rx World's Strongest Man contest, and the August issue of IRONMAN magazine has Jesse and his training covered. IronMind® | Randall J. Strossen, Ph.D. photo.

Watch for Jesse Marunde to put the pedal to the metal at the 2006 MET-Rx World's Strongest Man contest, and if you want to read about what he substitutes for an early morning cup off coffee, not to mention all the details on how he trains, get the August issue of IRONMAN magazine. Marunde, the first teenager to officially close the No. 3 Captains of Crush® Gripper, has produced some very nice weightlifting marks, but when he's not doing snatches or cleans and jerks, he's flipping tires, loading stones and doing all the other things that make up the day of a leading professional strongman. 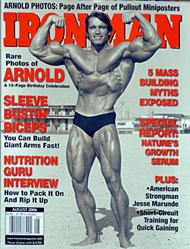 California Governor Arnold Schwarzenegger might have bumped him for the cover shot, but Jesse Marunde still got some ink on the cover of the August issue of IRONMAN magazine, and here's your chance to see how Marunde trains, eats and thinks.  IronMind®