Congratulations to Jedd Johnson and David Wigren, both of whom have been certified on the IronMind® Red Nail®. 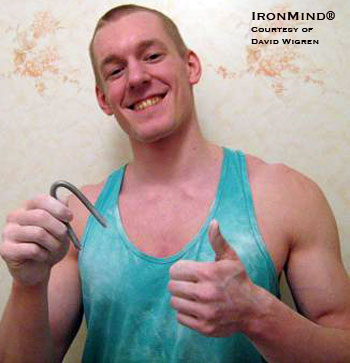 Talk about having a strong upper body: David Wigren, who was just certified on the IronMind® Red Nail, said that he's closing in on a double bodyweight dip. IronMind® | Photo courtesy of David Wigren.

Once fairly obscure, short bending has captured the imagination of a lot of guys in the last ten years or so and why not? How many people can pick up something bigger than the nails that built your house and then bend it in their hands?

Jedd Johnson was actually certified last year, but he asked IronMind® to hold off on the announcement until his certification could appear in MILO®, so he could surprise his buddy Jim Smith. We got that part right, but must have forgotten to come back and add Jedd's name to the Red Nail™ Roster®, but that's taken care of now. Also making the big time in short bending is David Wigren, and to give you an idea of the upper body power he's packing around, consider that David said he's, "getting pretty close to the 200% bodyweight dip," something he's "chased for some time now."