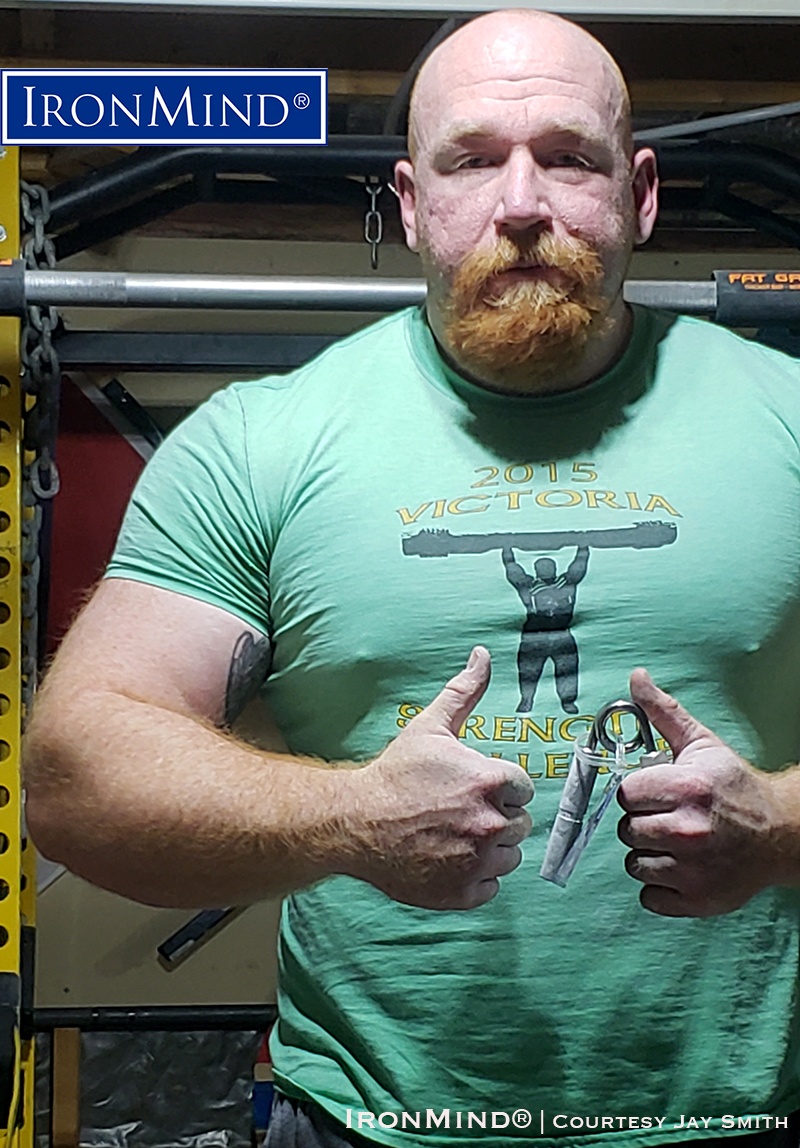 Jay Smith,  who works as “a correctional peace office (‘prison guard’) in Northern Alberta, Canada,” has certified on the Captains of Crush No. 3 gripper with a dominating offical performance. Smith—who is 34 years old, stands 6 feet tall and weighs 300 pounds—wants to be the first Canadian to certify on the Captains of Crush No. 3.5 gripper, and has the long term goal of certifying on the CoC No. 4 gripper. IronMind® | Courtesy of Jay Smith

Jay Smith (Canada) has just certified on the Captains of Crush No. 3 gripper, making it look like a warmup.

A former competitive strongman, Smith now arm wrestles, and to say that he successfully closed a Captains of Crush No. 3 gripper on his official attempt only tells half the story—the rest is how he closed it. Easily. Very easily. No wonder Smith told IronMind, “I'm looking to be the first Canadian to cert[ify on] the [CoC No.] 3.5 officially and hopefully take a run at the No. 4 within the year.”

Smith said he’s been hitting Captains of Crush grippers, “Off and on for probably 15 years. I don’t really ‘train with them. I dust them off and see if I’ve ‘still got it.”

“When I first heard of CoC grippers I was probably 15 or 16, and some powerlifters my grandfather knew showed me them. I closed the 2.5 and came close to the 3.

“Historically I didn’t do much grip work, just holding onto deadlifts, and doing farmer’s walk in contests. More recently I have started training grip and hand strength for arm wrestling.

Congratulations, Jay: your name has been added to the certification list for the Captains of Crush No. 3 gripper, and IronMind has a feeling this might just be the beginning for you.

Here’s a link to a video of Jay Smith’s official attempt to close a Captains of Crush No. 3 gripper.