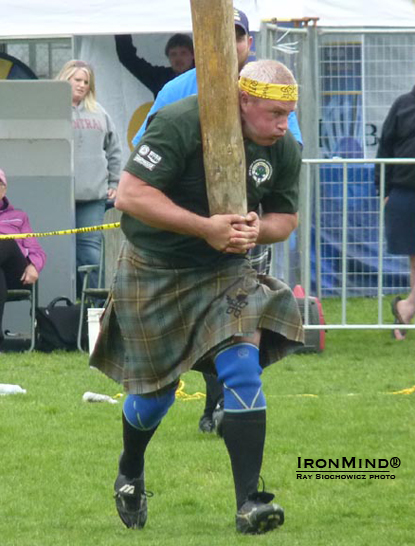 The Victoria Highland Games, one of Canada’s premier Games, attracted more than 20,000 spectators this year as it proudly hosted the 2012 Canadian Highland Games Championships.  Jason Johnston had one of the best all-round performances of his throwing career, despite fouling out in the second event of the first day with the 56-lb. weight for distance, and was crowned the Canadian champion for the second year in a row.

Johnston forged ahead mentally and focused on the remaining events in the championships to make a surprising comeback, winning seven of eight events and establishing two new ground records.

In the 56-lb. weight for distance, Johnston fouled out and it looked as if his chances of regaining the title were in jeopardy.  The event was won by Hadley with a distance of 40’ 4.5”; in second was Doherty with a respectable throw of 38’ 0.5”, and in third, Rob Young with 37’ 8”.

The 16-lb. hammer was a highlight as Johnston, who was totally in the zone, lobbed the winning throw an incredible distance of 139’ 3”, shattering Larry Brock’s 2010 ground record of 137’ 4”.  Second place was a tussle between Hadley and Doherty with second place just marginally going to Hadley at 127’ 8.5”, leaving Doherty in third at 127’ 4”.

The 56-lb. weight over the bar was won by Johnston at a height of 16’, with a tie for second at 15’ between Hadley and Doherty.

On Sunday morning the skies were a little overcast with a small amount of rain in the late morning but they cleared somewhat in the afternoon. The 17.8-lb. open stone was a close event, with the top three athletes all within inches of each other.  The win went to Johnson with a put of 48’ 6”; second was Hadley at 48’ 2” and third, Doherty at 48’ 1.5”.