Beijing - It doesn't seem likely that they say "Cowboy up" in Korea, and it's improbable anyone told her to "Be a man," but after losing the 2004 Olympic gold medal on what many felt was a dubious decision, Jang Miran bit her tongue; kept training; and when the 2008 Olympics rolled around, word was that the powerhouse Chinese weightlifting team consciously chose not to have one of their lifters go head to head with her. 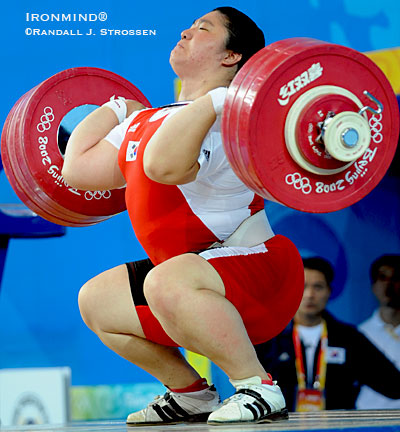 Jang Miran (Korea) hits the bottom with 186 kg on her third clean and jerk. Sure, Jang Miran won the Olympic gold medal and broke a bushel of records, but she also put the women's bar to its most severe test to date. IronMind® | Randall J. Strossen, Ph.D. photo.

"I think they are scared of the Korean lifter," an insider told IronMind® a few days ago, explaining why he felt the Chinese weightlifting team had not entered a lifter in this category and had chosen instead to give Jang Miran a wide berth.

It sounded nice, but perhaps it was more polite than accurate, and maybe it was a genteel way to eliminate one possible hurdle between Jang Miran and the Olympic gold medal. From her first attempt tonight, though, Jang Miran demonstrated that the Chinese assessment of her overwhelming dominance had been dead on the money.

And if anyone thought Jang Miran needed any breaks to win the gold medal tonight, consider that she broke five world records and seven Olympic records along the way - if you want to check the spelling of her name, just look next to any of the current Olympic or world records, because now she owns all of them.

Opening her six-for-six night, Jang Miran swept through 130, 136 and 140 kg in the snatch - the second attempt was good for an Olympic record and her third attempt broke the world record as well as the Olympic record (again).

Opening with 175 kg in the clean and jerk, Jang Miran broke the Olympic record in the total. On her second attempt, 183 kg, Jang Miran picked up the Olympic and world records in both the jerk and the total, and she must have liked that feeling because she did the same thing again with 186 kg on her third jerk.

So, even if it's not "Cowboy up," that's the message and the result was impossible to ignore: Not just an Olympic gold medal, but such a dominating performance that even reading the staggering numbers doesn't do it full justice.