Jamie Reeves told IronMind® that he had no idea how the rumor had gotten started that he resigned from IFSA. 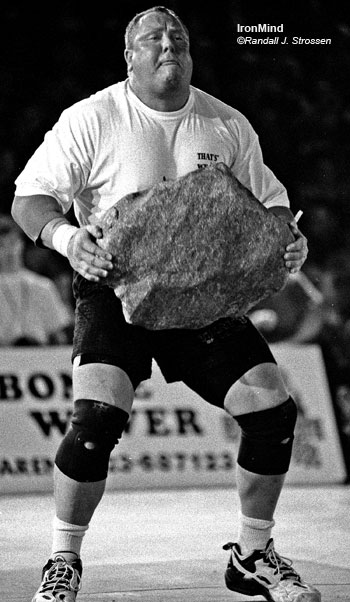 Winner of the 1989 World's Strongest Man contest, and one of the first - and still very few - guys who could bench over 600 pounds and deadlift over 800 pounds - Jamie Reeves has been working freelance as a welder, primarily in the petrochemical industry, and maybe his being somewhat less visible on the strongman circuit spawned the rumor about his resignation.

While Jamie said he is enjoying an "easy life," don't take it completely at face value because last month, Jamie lost two fingers at the knuckle when they got trapped in a pipe he was working on.

You wouldn't expect something like this to slow down Jamie Reeves, and it didn't - after a couple of days off "to get patched up," he was back on the job and soon he will be heading off to Cuba for a contract.

Along with his outstanding performances as a competitor, Jamie Reeves is well-known as a top-drawer strongman equipment designer, and he is the brains, as well as the hands, behind the IFSA stainless steel equipment, works of great beauty whose purpose was also to give strongman competitors a way to compete in standardized events - a concept that Jamie Reeves calls "a smashing success." So, too, are his stainless steel implements, and Jamie said that at the moment he is "building a full kit" for Zydrunas Savickas.

Even if you're not at the level of Zydrunas Savickas, if you want to set your gym apart, consider this option: Jamie Reeves is taking orders, and maybe you can talk him into signing your set.