It's in the in the city center area of Reykjavik, but don't think Magnus Ver Magnusson's new gym is anything but focussed on the gritty side of the training world: powerlifting, strongman, and boxing. 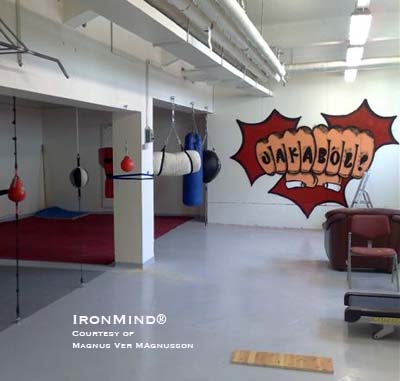 
Explaining that such Icelandic strength world legends as Jon Pall Sigmarrson and Hjalti Arnason originally trained in "an old place the city gave them . . . it was called Jakabol, which translates to something like "strongman's nest," Magnus said, explaining that he wanted to honor that tradition by picking up the name. "I am going back to the roots, so it's fitting to put that name on it."

Best known as a four-time World's Strongest Man winner, Magnus Ver Magnusson - in good Icelandic tradition - was no slouch as a powerlifter, and this Saturday Jakabol will be hosting a WPC competition. Asked why he was holding a WPC contest instead of an IPF event, Magnus Ver explained that he inherited the presidency of WPC Iceland from a friend of his and that was the reason why. Incidentally, Magnus Ver mentioned that Benedikt Magnusson is slated to compete, which means a big deadlift is very likely to happen so show up and have your cameras ready . . . even a modest number by Benedikt's lofty standards would likely be an impressive weight for just about anyone else.

Still somewhat rough, the gym will be open during peak traffic hours, Magnus Ver Magnusson said, and that members will have keys so that they can train whenever they want to.

"I own so many weights, so much strongman equipment - I have been collecting stuff and just keeping it stored . . . I have been thinking about this for a long time," Magnus Ver told IronMind®.

Jakabol is located at Tverholt 19 and the doors open at 9:00 on Saturday, with the contest and cocktail reception following later that day.