You can call him Salem Jaber (Qatar) or Yani Marchokov (Bulgaria), but either way, he's a super super, and he told IronMind® today that he's lifting at the Asian Games. 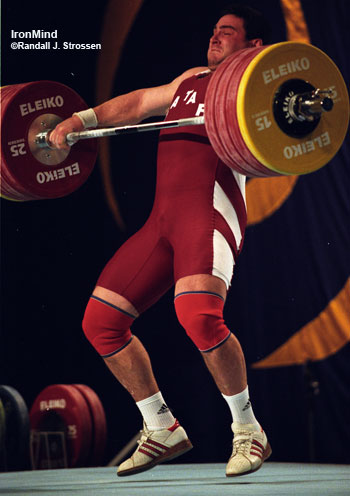 Jaber told IronMind® today that he is lifting in Doha at the upcoming Asian Games, which is good news for weightlifting fans because this is the guy who has snatched 210 kg at both the 2001 and the 2003 World Weightlifting Championships, and at the 2001 Worlds, he also cleaned 263 kg (only to miss the jerk). Jaber is big among weightlifting fans for the way he lifts: It's raw power that launches the bar.

Jaber said that he has a back problem which has hampered him and that he only has two months of training under his belt coming into this contest. Still, he said he has been snatching 190 - 195 kg in training, and cleaning and jerking about 230 kg, so even if not at the very top of his game, expect to see him lift some very respectable weights in Doha in a couple of weeks.