Ivan Abadjiev told IronMind® that he has been so busy studying English and working on other projects that his book has been put on the back burner lately. 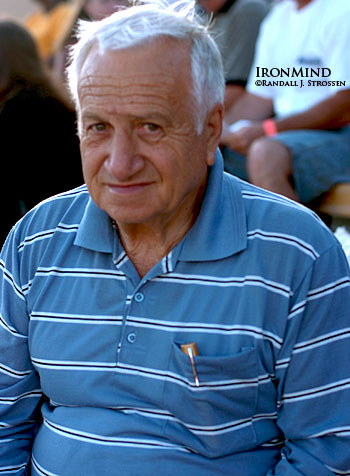 He's passionate about weightlifting, and his lifters have produced some of the most remarkable numbers in the sport, but Ivan Abadjiev's training methods are not without controversy. The fabled Bulgarian weightlifting coach now lives in Northern California, where his expertise is offered to such sports as football and track, as well as weightlifting. IronMind® | Randall J. Strossen, Ph.D. photo.

Speaking about his work, Abadjiev stressed that he is not in California as a weightlifting coach per se, but rather as an advisor and consultant to a range of athletes, not just weightlifters. Football and track were among the other sports that Abadjiev mentioned.

Having Ivan Abadjiev in Northern California has been described as "a golden opportunity" by Steve Gough, head of the Fairfax (California) Weightlifting Club before he retired from the San Francisco Police Department and moved to Montana, where he continues to coach, but Abadjiev's group has not yet opened its doors to the San Francisco Bay Area weightlifting community, which includes such notables in the sport as Jim Schmitz.

Also, IWF president Dr. Tamas Ajan recently told IronMind® that, "The IWF does not support Ivan Abadjiev . . . the IWF does not support his school," explaining that his methods have been linked to drug positives that have embarrassed the sport. Dr. Ajan regularly calls for "a clean sport," which is encouraged by an extensive drug testing program, six-figure fines and a published list of offenders, among other things.

On the other hand, Ivan Abadjiev has repeatedly said that he is here to demonstrate that his methods work with clean athletes, so an opportunity exists for all parties involved to meet on common ground.