Weightlifters - from Olympic champions to garage lifters - and coaches along the same continuum consider him to be one of the ultimate authorities in the sport: the name Ivan Abadjiev is an instant attention-getter in the worlds where how much you can snatch, and clean and jerk counts for at least as much as your balance sheet might in other circles. 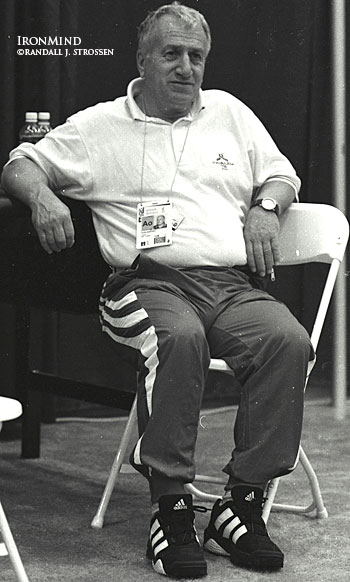 Ivan Abadjiev takes a moment to relax in the training hall at the 1996 Olympics, where he was awaiting Naim Suleymanoglu, who would go on to win his third Olympic gold medal in weightlifting. IronMind® | Randall J. Strossen, Ph.D. photo.

His standards are high, with Olympic gold medals as a symbol of success, and there is also the matter of the triple-bodyweight clean and jerk . . . imagine the power required to rip three times your bodyweight from the ground to arm's length overhead. Accordingly, his training methods are of legendary toughness and he told IronMind® today that some have called his system "cruel," because it demands so much from the athletes following it.

Now in Northern California, the renowned Bulgarian coach is preparing to share his vast pool of knowledge with lifters and other athletes who would like to put his methods to work for themselves, and for all who might not be able to meet the master in person, we have some very good news: Ivan Abadjiev is writing a book that will explain his methodology.

Focused specifically on producing the phenomenal results he is best known for, Ivan Abadjiev told IronMind® that his book will detail how to achieve this level without the use of such exogenous substances as stimulants or anabolic steroids, the very things that Abadjiev said he feels might produce short-term gains, but that can retard a lifter's progress over the long haul. Some banned substances became very popular, Abadjiev said, because they allow athletes to train less, rather than putting in the hours, weeks, months and years that are required to build strength, and in the long run, this short changes their results.