Athens – Among the highlights, the women's 69-kg category had three weightlifters break Olympic records, but in the end, it's all about Liu Chunhong (China), who won the gold medal, broke seven Olympic records, as well as both the junior and the senior world records in the snatch, clean and jerk and the total. 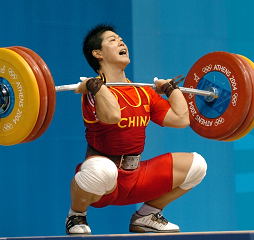 Liu Chunhong (China) hits the bottom with her 153-kg clean and jerk. This lift broke the Olympic, junior world and senior world records in both the clean and jerk and in the total. IronMind® | Randall J. Strossen, Ph.D. photo.

Liu Chunhong's first snatch, 115 kg, broke the Olympic record, and while that might have been a highlight for just about anyone's weightlifting career, that was only the first step in a very remarkable performance today. On her second attempt, she blew up 120 kg, to break her own red hot Olympic record, but before it could cool off, she hit 122.5 kg on her third attempt, for new Olympic, junior world and senior world records in the snatch.

Eszter Krutzler (Hungary), who had attempted world records in both the snatch and the clean and jerk, battled Zarema Kasaeva (Russia) for the silver medal, and Krutzler ended up getting it on bodyweight when both lifters ended the night 117.5/145.