Talking about how the early days of the Resident Program produced gains, USA Weightlifting Executive Director Wes Barnett told IronMind, "It all started with LeRoux." 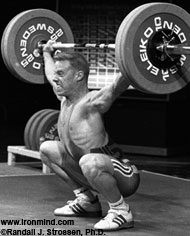 Chris LeRoux might be best known for medaling at the Junior Worlds, and he might never live down the "Jubilant Junior" photo caption that accompanied his USA Weightlifting cover shot, but what Barnett was talking about was how LeRoux started the chain reaction of hard training at the US Olympic Training Center, where each lifter took what the guy before him had done as a challenge, then pushed himself to do one notch better, and the result was that everyone benefited from being in Colorado Springs, training together.

Barnett was explaining the benefits of centralized training and how "Chris LeRoux was the catalyst. He was the reason why the Resident Program was such a success, because he was the rabbit - we all had to chase him." Barnett talked about how, in turn, Jeff Macy, Barnett himself and [now Technical Director/Men's Resident Coach] Paul Fleschler had to respond, and each had to raise the ante for the next round. Then National Coaching Director Lyn Jones used to describe LeRoux's ability to handle really tough workouts day after day, so if there was someone who could help spark big efforts, Chris LeRoux was the right guy for the job.

It's hard, sometimes, Barnett said, for the local coaches to let go of their best athletes, but the USOTC offers everything lifters need to reach their top performances and one of the crucial elements in the mix is the support and competition that naturally follow when you have all the top lifters training together under one roof.

Barnett is quick to credit his own coach, Dennis Snethen, now USAW President, for always encouraging him to go wherever he could get the best coaching, always putting Barnett's development first, rather than trying to cling to Barnett and thereby restrict his progress.

Barnett, who medaled at the 1997 World Weightlifting Championships, said that he was always chasing Paul Fleschler and no matter what Fleschler did in his workouts, Barnett tried to lift 2.5 kg more or in some other way one-up Fleschler. If Fleschler said to him, "You're just crazy," Barnett felt that he had succeeded, because he had done more than was expected and progress would be the result.