The longstanding Odd Haugen–IronMind partnership for premier grip strength contests continued yesterday as Amy Wattles established herself as the women to beat in the grip world when she annihilated the the world record in the CoC Silver Bullet and pulled a 130-kg Double Overhand Deadlift on the Apollon’s Axle, among other feats at the IronMind Record Breakers held at the NorCal FitExpo. 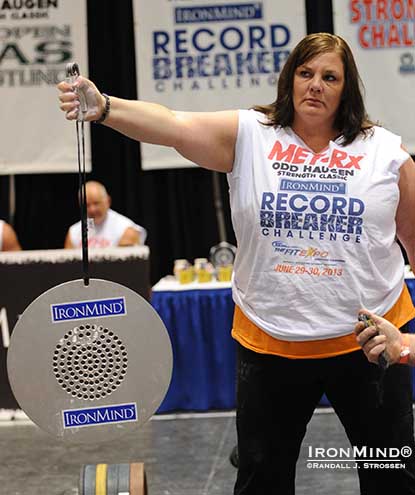 
The men’s side featured Russian grip star Alexey Tyukalov going head-to-head with America’s Mike Burke.  Rich Williams opted out at the last minute when his first flight on Friday was delayed, or there might have been even more pressure for the top positions.

Tyukalov won the Rolling Thunder with 130-kg, edging out Burke by 2.5 kg, setting the stage for the Apollon’s Axle.
If you look at the final results in the Apollon’s Axle Double Overhand Deadlift, you’ll see a three-way tie (Odd Haugen, Alexey Tyukalov and Mike Burke) at 210 kg, but that’s not the full story: Burke jumped from 210 to 235 kg in an attempt to break his world record and just barely missed finishing the lift for a down signal. 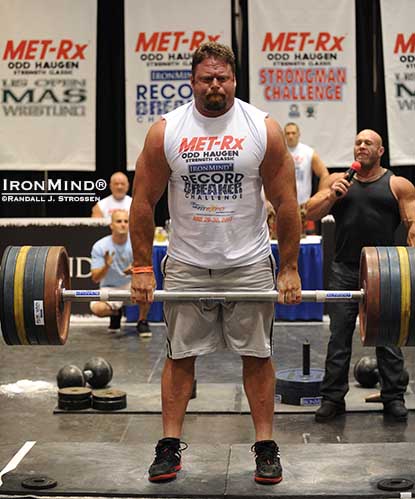 Wattles’s winning lift on the Hub was 42 lb., and Mike Corlett (aka Hubgeezer) took first place honors among the men with with an impressive 69 lb., and the right to tell his children and grandchildren about the time he beat both Burke and Tyukalov on a grip strength event in a major contest.

The final event was the Little Big Horn: Wattles won on the women’s side with 126-lb. and Burke beat all the other men with 176 lb.

Burke was first overall with 46.5 points, Tyukalov was second with 43.5 points and Corlett beat all but those two with a final score of 30.5 points.