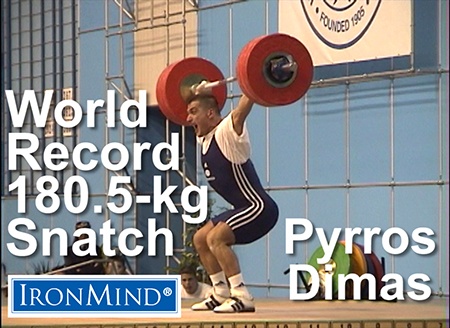 It was the battle everyone was waiting for, Pyrros Dimas (Greece) and Marc Huster (Germany) in the 85-kg class at the 1999 World Weightlifting Championships—and a huge crowd (about 10,000) turned out in Athens, 96% of whom were cheering for Dimas, of course.

Huster missed his first attempt but made the 172.5 on the second, okay but not great. Dimas made an easy 175; and Huster then did a nice personal record 177.5, in good position for the clean and jerks. Dimas, however, called for a world record 180.5, stepped on the platform and asked for quiet, and then made a strong, beautiful lift as the crowd cheered wildly.

Here's a video of Pyrros Dimas's 180.5 world record snatch, which can also be seen on the IronMind YouTube channel.

One lifter was left, Shahin Nassirinia from Iran and ranked third in the world, who had snatched 175 and cleaned and jerked 210 kg—and who would have thought that he would do another beautiful, perfect clean and jerk with 215 kg and upset both Dimas and Huster. Nassirinia made the lift and fell to the platform in disbelief: he couldn’t believe he won either.