Just hours before he would be competing in the finals of the WAF World Armwrestling Championships, Ioan Cristian Puscasu casually and with overwhelming force officially closed a No. 3.5 Captains of Crush® Gripper. 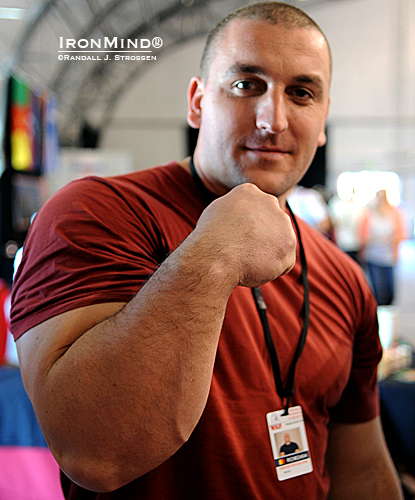 Yesterday was quite a day for Ioan Cristian Puscasu—he was certified on the No. 3.5 Captains of Crush Gripper and he placed 3rd in the superheavyweight class at the WAF World Armwrestling Championships.  IronMind® | Randall J. Strossen photo.


Even though IronMind had braced Bill Collins, president of National Armwrestling Promotions, for the possibility of an overwhelming performance by the Romanian grip phenomenon Cristian Puscasu, it was of little help because Puscasu’s performance left Collins agog.

“I was trying to call you,” Collins said to this reporter, as he knew I was en route to the WAF World Armwrestling Championships.  “I asked him if he wanted to try the Captains of Crush No. 3.5 gripper and he said, ‘Sure,’ so I ripped open the package, you could wiggle the credit card back and forth in between the handles and he went like this!” Collins said doing an air crush.”

Cristian Puscasu is 31 years old, stands 1.84 m tall (about 6’-1/2”) and weighs 125 kg (about 275 lb.), and while he swept through the No. 3.5 gripper with an easily-legal starting position, he said that all his gripper training is focused on the last 2 cm, a range that, for example, he has used for 27 consecutive reps with a No. 3.5 Captains of Crush Gripper.  He said that he also uses a Titan’s Telegraph Key extensively, to build his pinch grip strength.

If that’s not enough to get the grip strength world salivating, there’s more: Cristian Puscasu might be within striking range of the Rolling Thunder® world record.

It was my pleasure and honor to finally meet Cristian Puscasu in person yesterday and I would like to say a special thanks to his friends who were such patient translators, and to Bill Collins for serving as his referee for IronMind: congratulations, Cristian Puscasu—your name has been added to the official certification list for the No. 3.5 Captains of Crush gripper!