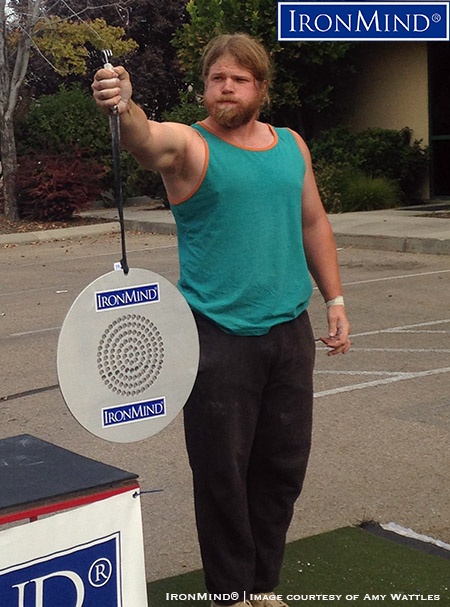 Chase Wiley is aiming to break the world record on the CoC Silver Bullet. IronMind® | Photo courtesy of Amy Wattles

Amy Wattles, whose credentials in the grip world include certification on the Captains of Crush No. 2 gripper as well as holding the women’s world record on the CoC Silver Bullet and the Apollon’s Axle, sent in a report on the contest she held over the weekend—introducing the CoC Silver Bullet as an event in strongman contests.

“I just wanted to thank you so much for your sponsorship and support for United States Strongman Idaho Strongman Challenge, which was this past weekend. I was very excited about implementing the [CoC] Silver Bullet in a strongman competition and it was a very wise choice. First of all, it was a challenge to those who are not familiar with grip training and it allowed them to have a sneak peak into the world of grip. From a promoter's perspective, it was very smooth, easy to implement, manage and clean up. This is definitely an event I will include in the future.

“We had competitors going head to head, each having his own timer. The novice men elected to use the COC 2 and the HW men had the option of using a 2.5 or 3. Of course any time with the heavier gripper would beat a lower gripper. Of particular interest, not knowing his grip background, I had asked HW competitors Chase Wiley what his goal for the Silver Bullet was and he replied, ‘To beat the world record.’ That was music to my ears and was eager to see what he was capable of. Chase won the event holding the COC 3 gripper for 27.44 seconds.

“Chase was extremely disappointed with his time, reporting that in training 52 seconds was his PR on this event. Of course prior to doing this event, he had already done log press, truck pull and max 18" DL. The final event was a 350 stone load for reps. Chase has already sent in his entry for Odd's competition at the LA FitExpo in January and is eager to have a crack at more grip events integrated into a strongman competition. Right now my plan is to be there as well to attempt to break a record or two.

“I have attached a pic of the head to head part and then Chase going on his own with the Captains of Crush No. 3 gripper. The event page on FB is https://www.facebook.com/events/348040062067000/ if you wanted to see more pics. I am pleased that sanctioned competitions are back on the map in Idaho and look forward to the next one. One thing is for sure, competitors should count on seeing the Silver Bullet at future competitions.

Once again, thank you so much Randall.”
Got to like that and I’m looking forward to seeing both Chase and Amy at Odd Haugen’s strongman-grip-mas wrestling contest at the LA FitExpo in January. 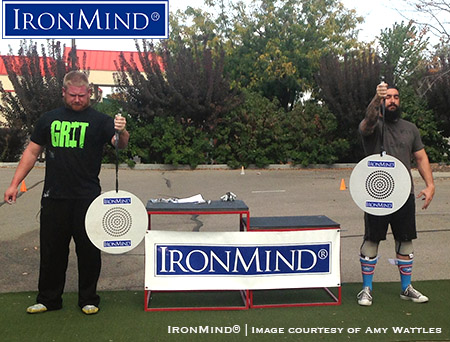