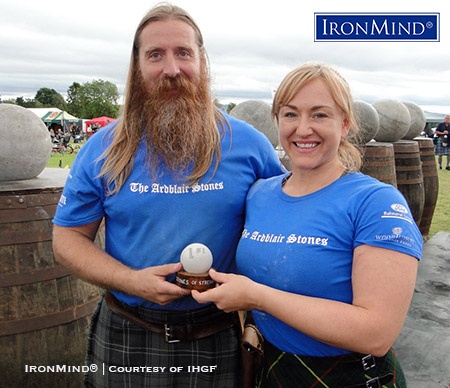 An exciting qualifying series was held throughout Scotland with the renown Ardblair stones for athletes to earn a place at the IHGF Scottish Stones of Strength Championships at the Blairgowrie and Rattray Highland Games. The series was organized and run by Scotland’s IHGF representative Charlie Blair Oliphant, a reputable and devoted stonelifter.

The men’s group at the 2018 IHGF Scottish Stones of Strength Championships included Kenny Simm, Janis Skujins, Lewis McLuckie, Jamie Gorrian, Paul Adams, Liam Tweedie, and Jim Gerrard. A large crowd surrounded the stones arena at the stone to shoulder event, with athletes choosing to lift stones of 100, 142, and 151 kg for as many reps as possible in 75 sec. Simm and Skujins tied with 1 rep each on both the 142-kg and 151-kg stones; third went to McLuckie with 1 rep each on the 100-kg and the 151-kg stones.

The Nicol stones event was fashioned after the famous Dinnie Stones and consisted of two stones, 114 kg and 138 kg (a combined weight of 252 kg), with ring handles attached. Going for a max distance without dropping the stones, Simm took the win with an impressive distance of 15.00 m over Skujins, who did 11.11 m. Gorrian placed a close third with 10.40 m.

The Husafell stone weighed 141 kg and was carried for max distance. McLuckie put up a great performance for the win at 117.1 m, followed by Tweedie at 113.1 m and Skujins at 97.9 m.

The climactic finish, with the 9 Ardblair stones lifted onto barrels maxing out at the final stone at 152 kg, was close, with Simm setting a top time of 39.34 sec. and Skujins a whisker behind at 40.04 sec. Gorrian completed all 9 stones in 78.11 sec. for third.

Next, athletes had 75 sec. to press a 65-kg log overhead for reps; if the athlete was unable to press, she would flip a 75-kg log end over end for reps. This duel ended in a tie between Smith and Moar with 3 reps each; Eppy placed third with 9 flips of the 75-kg log.

The final event of the championships was the Ardblair stones, 5 stones weighing up to 75 kg loaded onto barrels in the fastest time. Smith did all 5 stones in a speedy 17.11 sec. Thomson also did all 5, in 25.89 sec. and Moar was third, with 5 stones in 33.04 sec.

The IHGF would like to thank all those who helped in the Ardblair stones qualifying series and the finals of the IHGF Scottish Stones of Strength Championships, and its organizer, Charlie Blair Oliphant, along with judges Charlie and Gill Blair Oliphant, Andrew Cairney, Brett Nicol, and Stevie Shanks; and helpers Liam Tweedie, Mark and Pauleen Sherriffs, Pauleen Sherriffs, Catherine McHendry, Heather Shanks, Lynn Stewart, Mark Haydock, and Dean Kent.

Janis Skujins, Emmajane Smith, and Andy Cairney will compete in the IHGF Stones of Strength World Challenge in Fefor, Norway in 2019 .