The first day of the 2013 IHGF Scottish Stones of Strength World Challenge opened with a bang as Peter Puzser set a new record for walking with the Dinnie Stones. 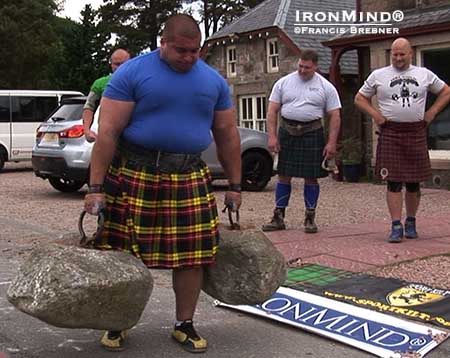 
Record Day for the Dinnie Stones
by Francis Brebner

History was made on the first day of competition in the IHGF Scottish Stones of Strength World Challenge.  The Potarch Hotel, which is located a few miles from the village of Banchory, set the stage for the first event of the challenge.  The Dinnie Stones were first made famous by Highland Games legend Donald Dinnie, who over 150 years ago was believed to have walked with two stones, one in each hand at a combined weight of 785 lb., a distance of five yards (15 feet) across the Potarch Bridge—a feat of strength that has been unmatched until today.

Peter Puzser of Slovakia made history, rocking the stonelifting and strength world as the first person since Donald Dinnie in over 150 years to surpass the legend of Dinnie Stones with an astounding distance of 18’ 4”.  Puzser did not finish his day there but also added himself to the record books as the sixth person to press the world-renown 265-lb. Inver Stone overhead.   Looking at Peter, I was reminded of a modern-day Paul Anderson, who was one of the world’s strongest men in his day with his freakish strength and massive, muscular build.

Peter Puzser is a man who was born to be a stonelifter, of that there is no doubt.  Just sitting and going over the lift and carry time and time again in my mind, I feel without question this has to be one of the biggest feats of stonelifting and overall strength displayed in the twenty-first century—just unbelievable.   The World Challenge is being filmed for European TV, with one event more to be contested tomorrow.  Stay tuned for more news and overall results.