Featuring “the best of the best,” Francis Brebner told IronMind®, the International Highland Games Federation (IHGF) is holding an invitatational masters' meet in Belgium next year. 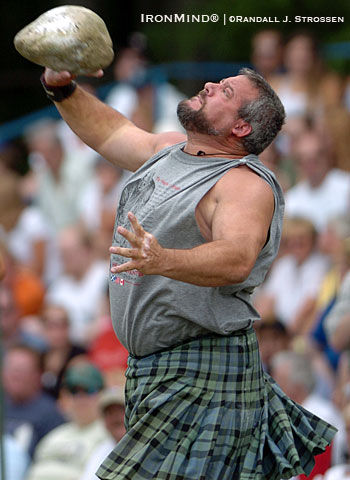 Ryan Vierra, one of the most dominant Highland Games athletes in the recent past, is qualified to compete as a master - just to give you an idea of the sort of talent a top masters’ event could include.  IronMind® | Randall J. Strossen photo.

The date has been set, the location has been confirmed, and the championships decided.  Ooidonk Castle in Belgium on the 28–29 August 2010 will be the host of the IHGF Masters' Invitational World Heavy Events Championships.

When Tommy De Bruyn and his wife, Sabien Desmet De Bruyn, were organizing a Masters’ European Championships, after discussing the different options of hosting IHGF championship events with the IHGF, it was then decided to go with something a lot bigger than what they had already planned.  All of the top masters in Europe would already be invited and the monetary backing from their general committee was in place.  It was then agreed to bring in other top-ranking international athletes from abroad to make this one of the greatest masters’ championships ever to be staged.

This IHGF Masters’ Championships are by invitation only to top professional athletes who are over the age of forty and who have either competed in any past IHGF world or national championships or who have been a national or world record-holder in any of the Highland Games traditional events to ensure that only the best are invited.

Tommy De Bruyn, who is the president of the Belgian Highland Games Federation, in association with IHGF, said, “We are very happy to see a professional world championships like this come to Belgium, and we are very pleased to be working with the IHGF in order to bring the best professional masters from around the world to our country.

“We have been working very hard on this championships to make it the best possible for all that are invited.  All costs such as air fare, accommodations, and food will be covered so there is no expense whatsoever for the athletes, with very substantial prize money for the top three overall athletes of the championships as well.”

The IHGF said the main goal of the federation is to promote and establish Highland Games and world sanctioned events wherever possible to keep the tradition of the sport ongoing.  When talking with Tommy and Sabien, all the criteria for this IHGF World Masters’ Championships were met, in terms of having the essential funds to bring the best in from all over the world at no cost to the athletes.

Also sanctioned will be an IHGF Masters’ World Weight-Over-the-Bar Championships, once the lineup is confirmed for all the invitees.  This will be made public in the next few days; however, the IHGF can confirm that if all the top-ranking athletes accept this invitation, it will be one of the best competitions to be staged next year, for sure.

We have noticed just in the last few years traditional Highland Games in Europe really taking off, with increased demand to host championships events with top-ranking athletes – the future for the sport is looking very good.