David Webster, OBE has reported that “all those drug tested at the [2009 Highland Games] World Championships . . . have passed with flying colors.” 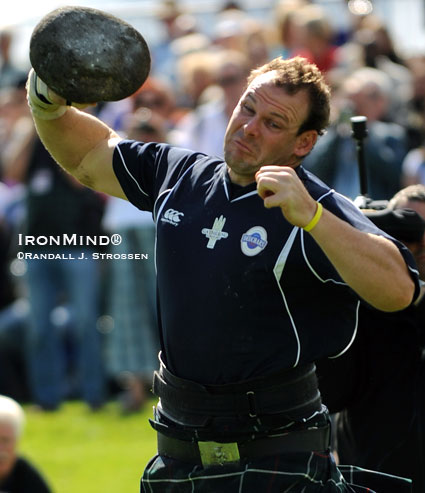 Today I returned from Canada and the Highland games at Maxville, Glengarry, Montreal and Fergus.  I was delighted, but not surprised, to receive the news that all those drug tested at the World Championships, top men and random alike, have passed with flying colours.  I thought you would like to know about this. It is expensive and time-consuming to set up, but I feel it is imperative that we show that our athletes are worthy champions and it is heartening that you all participate when you know very well that there is genuine testing for anabolic steroids, amphetamines, masking agents, etc.

Thank you most sincerely.  Special thanks to Dr. Bill Crawford and Francis Brebner for the important part they played in conducting the sampling and administration at the venue.

I think that our many recent important events on both sides of the Atlantic and in Europe shows that we are moving forward and the splendid  future programme reinforces this view.  Ryan and Francis have done a great job in developing new locations for world class events. Tommy and his wife are also taking steps to boost the European dimension. In the thirty years of the World Championships we have never had a better group of top class athletes than those of the present.

YOU HAVE MADE HISTORY AND THE FUTURE LOOKS GOOD.

This sounds like the perfect ending to the 2009 Highland Games World Championships, which began with an on-field visit from none other than Prince Charles and his wife, Camilla.