It's a tangled mess that involves shipping massive amounts of IFSA Strongman equipment halfway around the world for the 2007 IFSA World Championships, and along with athletes who never received their prize money for competing, the freight company that moved the merchandise so the show could go on was left holding the bag, to the tune of US$63,000; and to recover at least some of the money it is owed, the shipping company is going to sell all the IFSA Strongman equipment it has in its possession. 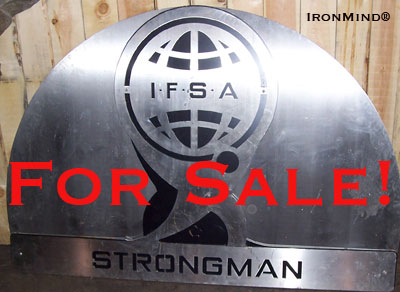 It's quite a change from the one-time high flyer of the strongman world, when IFSA Strongman talked of seven-figure purses and compared itself to WWE and Formula One. Now, it's fire sale time, and even the people who once were happy to present themselves as kings and queens from the land of IFSA are quick to distance themselves from the organization whose strongman equipment is being sold for lack of payment on a shipping bill. IFSA Strongman: Going, going . . . . IronMind® | Photo courtesy of Al Thompson.

Al Thompson has provided the following inventory list, so that prospective buyers can review the offerings:

Thompson is involved with the sale because it was his sponsor that got burned on this deal, he said, adding that he had hoped to initiate the sale earlier, but he was hospitalized and that slowed things down.

"John Cirone can be reached at jcir1@yahoo.com to make offers," Thompson said, referring to the man who's firm got stiffed by IFSA. "Freight FOB origin. John will make a freight deal if enough equipment is bought."