For weeks, the rumor had been that IFSA was going to hold its 2006 World Championships in Iceland in November, but until some loose ends were tied up, no announcement would be made; and in the meantime, some people simply assumed the contest was never going to happen. 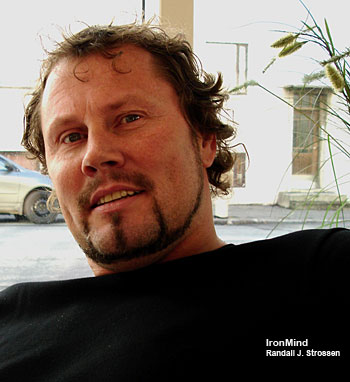 Magnus Ver Magnusson, who is the primary organizer and promoter behind the upcoming IFSA Strongman World Championships, relaxes in Reykjavik, the site of the upcoming competition. IronMind® | Randall J. Strossen, Ph.D. photo.

Today, it became official - in four weeks, IFSA will hold it's joint qualifiers and finals for its 2006 World Championships.

IFSA Strongman had hit the point this year where many thought the self-described "world governing body of the strongman sport" would, in fact, not hold a world championships in 2006, with so little time remaining. In fact, Magnus Ver Magnusson told IronMind® that a company had been working for some time to organize the event, but it had not produced anything of consequence so he stepped in, lining up potential deals, scheduling meetings and so forth and that as a result, in a series of three visits to Iceland, Dr. Douglas Edmunds was able to close the deals required to pull off this contest. As far as the prize money goes, Magnus Ver told IronMind®, " I don't know yet, but it's not going to be less than TWI paid."

This is the structure of the contest: Three groups of eight competitors will participate in the qualifiers and from this round, three or four (to be determined) competitors will go on to the finals. To avoid possible disputes related to things such as different competitors having different amounts of time to rest between the qualifiers and the finals, Magnus Ver said that the qualifiers will be run in one day. The entire event is scheduled to be held in Reykjavik November 18 - 25 and from these contests, ten television programs will be made, said Magnus Ver, with global distribution reaching 350 million households - a TV package that was enhanced by IFSA's cooperative agreement with United Strongman Series, he said.

National federations were given athlete allotments, Magnus Ver said, adding, "Iceland will have a competitor in each of the heats . . . I think Dione [Wessels, IFSA-USA president] was given three."

Saying that "the city of Reykjavik is behind this," Magnus Ver said "this is the biggest thing in strongman ever in Iceland."