Alan Black, of Top of the World Films, said his documentary about Hugo Girard, titled Strongman, is having its "world broadcast premiere in Canada" on CBC Country Canada tonight. 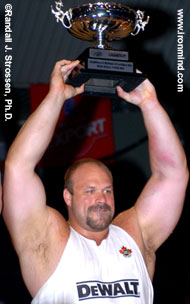 Alan Black said that his film Strongman "is being promotoed as part of their new crop of exciting documentaries," and he hopes "it will open the door for much more programming of this nature."

Broadcast times are at 7 pm and 11 pm tonight, but please confirm this with your local listings.