Hugo Girard has just signed a deal to host a 2007 Super Series event in Canada. 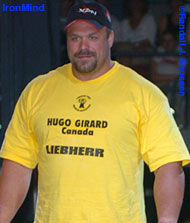 Girard, who is the 2004 World Muscle Power champion, told IronMind® today that if he were not already committed to returning to competition at full strength, he might have been able to promote a Super Series event this year, but because his top priority is not just to completely heal, but also to reenter strongman competition stronger than ever, he felt could not promote a Super Series event until next year.

Girard has been putting on top flight strongman contests in Gatineau, Quebec since 2000 and he said the Super Series contest will be in Gatineau and it will build on this tradition of excellence.

As far as what his fans can look forward to this year, Girard said that he will begin event training in March and that he plans to be ready for the first Super Series event this year, with the goal of qualifying for the 2006 World's Strongest Man contest.