When his patella tendon blew last year, Hugo Girard dropped like a stone, but why let a little thing like that keep you out of strongman competition? 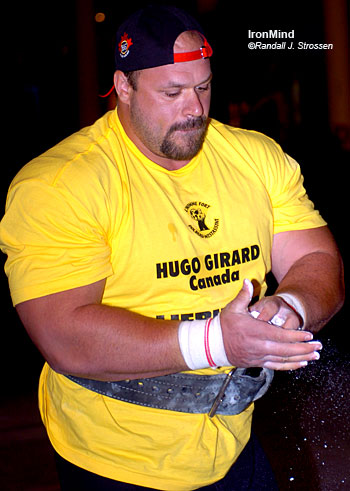 Guess who's coming back to strongman competition this year? Hugo Girard says he will compete in the WSMSS/Viking Power Challenge . . . on his way to the World's Strongest Man contest. IronMind® | Randall J. Strossen, Ph.D. photo.

You certainly don't if your name is Hugo Girard, who said he will compete at the World's Strongest Man Super Series Viking Power Challenge run by Svend and Lene Karlsen in Norway on July 7.

"I'm going to be ready," Hugo told IronMind®. "Right now, I am about four weeks out from beginning event training . . . I have clearance from the doctor."

The Canadian strongman who makes the Inch dumbbell look like a baby rattle said that he is weighing about 322 pounds, and he's pretty trim, too.

"Everything is going according to plan," Hugo said, and even though he has been focusing on high-volume training, his comment was, "I feel pretty strong."

"We have a strategy," Hugo said. "It's to be really strong for World's Strongest Man . . . we're going to give it another shot."