Northern California is the center of some of the top weightlifting in the United States and at the nucleus is Sacramento High, home to one-half of Kevin and Paul Doherty’s Hassle Free Barbell Club. 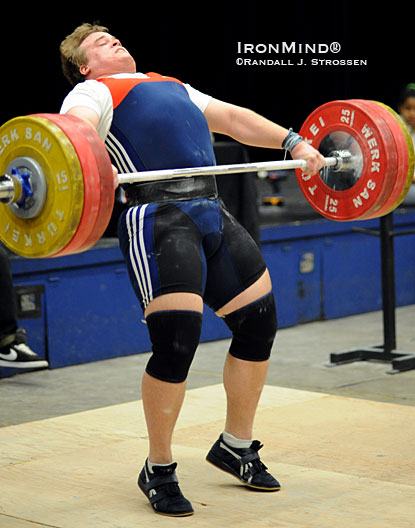 
The 2010 Pacific Weightlifting Assocation (PWA) championships lived up to expectations, producing plenty of hot lifting fueled by the energetic, can-do atmosphere created by the Doherty brothers in a high school environment.  Calling the action with an insider’s eye, Paul Doherty filed this report with IronMind®.

Sac High once again played host to the 2010 PWA Championships and the lifting seems to improve each year.  Last year's contest highlighted the lifting of young new faces ready to make big splashes on the international stage, and this year was no different.

The depth of the talent pool across all of the weight classes was most impressive, with perhaps the closest competition in recent history to determine best lifter performances.

Starting things off was 2009 Youth world team member Sae Vang who most recently came home with the gold medal from the 2009 American Open in Mobile, Alabama in the 56-kg class.  Sae has now made the move up to the 62-kg class and weighed in at a slightly heavy 63.1 kg.  Well, after 3 perfect and dominant snatches of 80, 83 and 86 kg for a personal record, Sae kept pace in the clean and jerk with 3 perfect lifts of 115, 120 and 125 kg.  This 211-kg total is an 18-kg improvement from December, and his lifts were done with the ease and precision of a training day.  Sae will be skipping the Junior Nationals this year in lieu of lifting at the Arnold Classic the very next weekend.  Having won the gold in the jerk at last year's Junior Nationals, Sae has his eyes set on the Senior Nationals in June, where he doesn't plan on taking a back seat to anyone at the senior level.

Even more dominant than Sae in recent meets is his Hassle Free and Youth World Championships teammate Ian Wilson, just 16 this year.  Ian is the go-ahead favorite to earn the first-ever Youth Olympic berth for the USA if he can perform well enough at the continental qualifier in April.  If recent totals are any indication, you can count on it as Ian smoked a 138-kg snatch, one kg more than he did at the American Open, en route to a 298-kg total.  Ian took a crack at the PWA junior record in the Snatch with 141 kg, a mark that would have surpassed his Hassle Free teammate and 7th place finisher at the Junior Worlds last year Donavan Ford.  Not there to defend his record that still stands, Donavan is diligently training in Colorado Springs at the USA Olympic Training Center where he notes the recent return of USAW superstar Casey Bugener is helping.

And if that wasn't enough, the guy who actually won the best junior lifter award is perhaps the hottest commodity in the country right now, California Strength's Caleb Ward.

Caleb is coached by Glenn Pendlay, who coached both Caleb and Donavan to top placings at the Junior World Weightlifting Championships last year, and on this day Caleb broke all three of his own PWA junior records, with lifts of 156 kg in the snatch and 192 kg in the clean and jerk, for a 348-kg total to win the +105-kg class.  Watch out for Caleb as he looked better than ever!

On the girls' side, Hassle Free's Chioma Amechi broke more records than any of the boys.

She broke all of the junior records as well as two of the senior records with her lifts of 80 kg in snatch and 113 kg in the clean and jerk for a 193-kg total.  Chioma looked great and has likely the best chance of any of these young lifters to find the podium at Junior World Weightlifting Championships this year in Bulgaria.

When a 326-kg total by 94-kg lifter Jon North, who can basically book his ticket to the Pan Ams with a good day at the Arnold, and a 340-kg total by Bruce Wilhelm's son Brian, who took second in the supers - by no means second class news - are overshadowed by the top junior performances, you know the caliber of lifting is top quality.

Great job by meet director Dave Swanson, who can brag that every session started and ended on time.  The two platform set-up made this possible and gave the spectators twice as much action in half the time, a detail not lost on all of us trying to increase the appeal of the sport.