The Islamic Republic News Agency reported today that Hossein Rezazadeh is "determined to break his own records" in next year's Asian Championships and World Championships. 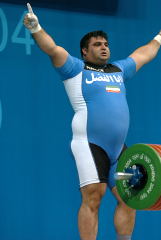 Hossein Rezazadeh celebrates his successful opening snatch at the 2004 Olympics (Athens). If there is anyone who makes a 200-kg snatch look light and easy, it is this man. IronMind® | Randall J. Strossen, Ph.D. photo.

At last week's executive board meeting, the IWF suspended the entire Iranian weightlifting team for one year, enforcing the IWF's "one-year suspension against national federations that produced three or more positive tests results last year," and yesterday it was reported that the IWF rejected Iran's request to waive the ban.

Rezazadeh, a two-time Olympic gold medalist, holds all three world records in the +105-kg category, and the IWF confirmed today that while he is ineligible to compete in this year's Asian Weightlifiing Championships, the November date of the World Championships falls after the suspension period has passed, making him eligible to lift then.

So if he chooses to attack them, Rezazadeh's world records should be ready to fall.