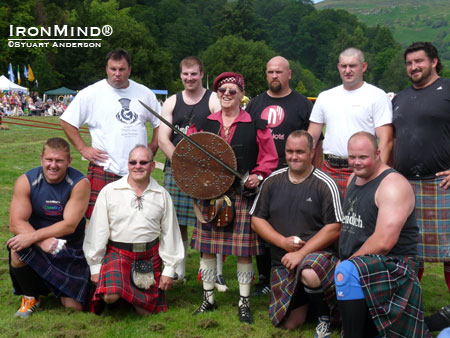 Chieftain of the Games David Webster O.B.E. is surrounded by heavies at the 2011 Killian Highland Games.  IronMind® | Stuart Anderson photo.

One of the most publicized Games in Scotland, the Halkirk Highland Games pulled in record crowds of more than 10,000 spectators who came from all over the northeast in Scotland in perfect weather conditions.  More than 15 athletes participated and ground records tumbled throughout the day’s competition.

Pockoski and Sam Grammer (USA) lit up the 56-lb. weight-over-bar with some great throwing, both tying for first place at 15’ 6”.  Grammer went on to first in the caber with an 11:55 toss.

The final event, the 16-lb. sheaf toss, was a tie at 33’ between Price and Pockoski.  Third place was also a tie between the senior champion Alistair Gunn of Scotland and Grammer at 28’.

When all was said and done, Pockoski came out on top overall, with Price in second and Sinclair Patience (Scotland) third.

At the Killian International Highland Games, in a day of big crowds, big throws and scorching heat, Scotland’s Craig Sinclair established two new ground records.  The Games were officially opened by the Chieftain of the Games David Webster O.B.E.

The caber ended in a mass first equal between Lorne Colthart, Neil Elliott, Steven King and Sebastian Wenta.  The final event with the 56-lb. weight-over-bar was exciting to watch as the Polish brothers L. and S. Wenta tied at 16’ 6”.