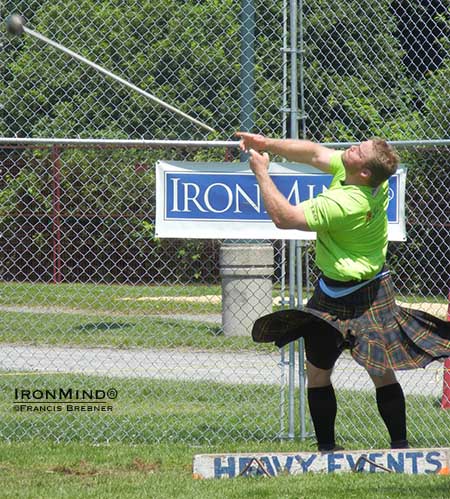 Dan McKim was red hot on the hammers, part of the winning formula for the his overall victory with teammate Sean Betz at the 2013 IHGF Team World Championships.  IronMind® | Francis Brebner photo.

Records tumbled on the first day’s competition of the IHGF World Highland Games Team Championships in Antigonish, Nova Scotia, which celebrated its 150th year of Highland Games, the oldest continuing Highland Games outside of Scotland.

The caber, which was 21’ 6” in length and 120-lb. with very little taper, was turned by only one athlete, Dan McKim, in a perfect 12 o'clock toss.  Zolkiewicz took second with an 85-degree attempt and L. Wenta was third with 75-degrees.

Vincent showed great form in the 28-lb. weight for distance, equaling the field record held by Larry Brock set in 2009, with a distance of 86’ 6” on his first throw.  On his final attempt, he crushed the ground record with a rip-roaring 87’ 4”, which got a huge response from the spectators.  In second place was McKim with 82’ 1” and in third, Sebastian Wenta with 78’ 10-1/2”.

The next event, for the IHGF World Caber Tossing Championships, was electrifying to say the least.  The caber, 120 lb. and 21’ 4” in length with no taper at all, proved a worthy stick, with the win going to McKim, who pulled it out of the bag on his final attempt, nailing a toss of 12:10 and edging out L. Wenta, who placed second with a toss of 11:45.  S. Wenta took third with a toss of 11:30.

The final scoring event of the championships was the 56-lb. weight over the bar, and it was won by Zolkiewicz with a height of 18’.  McKim was second at 17’, and L. Wenta and Betz tied for third at 16’.

Having a word with the newly crowned champions, Dan McKim and Sean Betz, I asked how it felt for them both to win this title for a second time and to be here in Antigonish, which is one of the world’s renown Highland Games on the international circuit.  Sean said he was “very happy to win this again and to return to the Antigonish Highland Games and to be a part of its 150th celebration.”  “This is a very special Games for me,” added Dan McKim, “my first time here in Antigonish, and it is an honor to be part of this historical event.  This has to be one of the greatest competitions I have been in.”

The IHGF would like to thank athletic director Donnie MacEachern, head judge Leo MacDonald, and field judge Marty Gilfoy for officiating at the IHGF World Team Championships, and the Antigonish Highland Games Society Committee for all its hard work in putting on such a tremendous event, which was second to none. 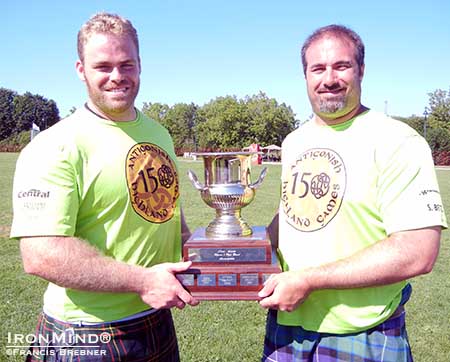