Francis Brebner had a chance to catch up with top Highland Games professional Larry Brock and filed this report with IronMind®. 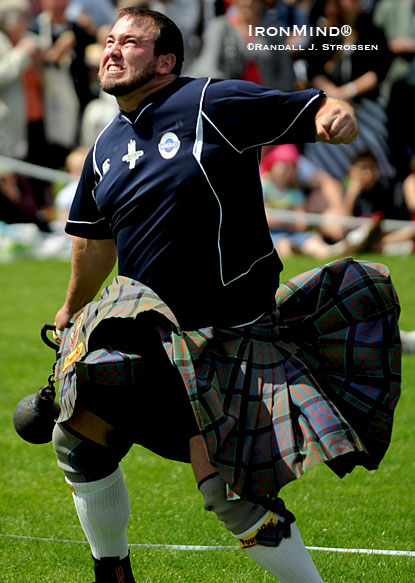 
[Starting with his family] Larry said, "We had a new addition to the family, a baby girl who came into our lives on October 24th at 10:40 p.m.  Mom and baby (Kylie Adele Brock, 7 lb.) are doing great.

"As for me, I had the MRI on the ankle and it showed a fluid sac buildup that should go away.  I severely sprained it July 9th at Grandfather Mountain and I competed six days later in the IHGF World Heavy Events Team Championships in Antigonish, Canada and then flew directly to Scotland and competed in Iveraray Highland Games; then a few days after that I competed in IHGF World Heavy Events Championships in Edinburgh.

"It was while competing in Edinburgh that I sustained the quad injury.  I have taken about three full months off and only now I have started lifting again and am feeling good.  I have a sinus infection right now, but I feel that this will be a good off-season for me.

"My quad had a definite tear and you can see the hole left in the muscle.  I'm trying to get that repaired through lifting and stretching.  The schedule in Edinburgh really messed me up with the long breaks in between the events and that's when I tore it, right before the weight over bar.  I then tried to compete in the Fergus Highland Games, and the Charleston Highland Games, then Virginia Scottish Games, but my injury and my work schedule really put a halt on big throws.

"I took over as the offensive coordinator for the football team I coach so that took up a lot of my time along with my family.  I had a lot of fun this past year and it really felt like an off year because I only did fifteen or so Games, when I usually do around almost forty, so next year should be a great comeback year.  I have been competing in Highland Games now for about eleven years and this will be my eighth year as a professional so I will continue to work hard and try to be the best.”