It had the impact of a bombshell in the strongman world yesterday when IronMind® reported that Arild “The Emperor of Stones” would be competing in Giants Live–Poland in a bid to gain an invitation to World’s Strongest Man 2010. 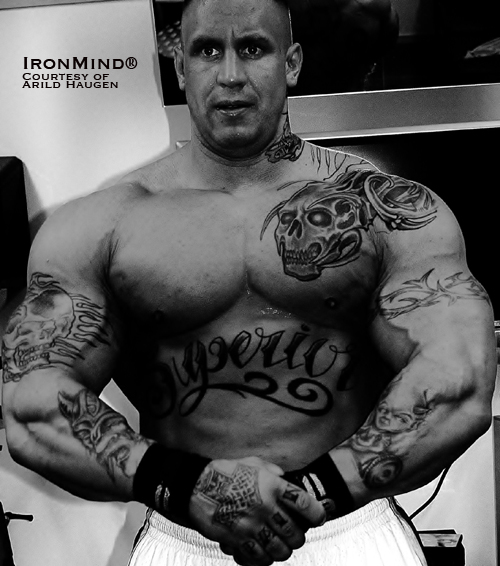 Arild Haugen is ramping up his heavy training in a bid to compete at this year’s World’s Strongest Man contest and by all early indications, his re-entry into the strongman world should be accompanied by a fair warning to the other competitors: Look who’s coming to get you!  IronMind® | Photo courtesy of Arild Haugen.


“Yes sir, it’s true that I really want to go to WSM this year,” Arild Haugen confirmed for IronMind®.  “And therefore I will have to qualify through the Giants Live competition in Poland.

“I did a competition in [the] beginning of June in London.  I had trained only for 3 - 4 weeks and did a couple of good lifts and enjoyed the competition and the meetings with all the other strongmen.  But after being away from the strongman events and the heavy weights I felt that I still had some power left, and after doing 12 reps in deadlift with 310 kg I started thinking about how good I could be if I trained some months more.

“So right now I am increasing the weights every week but still I haven't started the heaviest part.  The competition in Poland is heavy and not my favorite events, so it has made me train on my weaknesses :)  After Poland I know a little bit more and if I get an invitation I will be ready and rested for a real work up until the World's Strongest Man.  I know all the other guys are getting stronger and bigger every year, but I have improved a lot on other stages when I have been gone, so hopefully I will show you a new reborn HULK.  And my goal is definitely to keep the title Emperor of the Stones.  And I hear rumors that there maybe will be some new and shocking events at the worlds [World’s Strongest Man contest] this year.

“A friend of me told me once, ‘If you're good at something, you should stick with it.’  And I guess I`m a better strongman then a boxer.  But I am also an idealist.  I`m on my way, but I don`t know where I am going.  The worlds is a competition that fits me well.

“My current stats are: 150 kg with better endurance then ever.  I feel like I am weighing 125 kg and I am doing a lot of cardio and events training.  I will try to get better on my weakness and keep my best events like they were :)  LET'S GET NASTY!!!!

“If I get invitations for the Worlds, The Viking [Svend Karlsen] will train me until I eat chains and s*** chains he told me :) .”