Freshly returned from the Highland Games World Championships in Inverness, Scotland, Pleasanton Highland Games Athletic Director Steve Conway reviewed the field and said, "At this point in the season, it's almost a battle of the fittest." 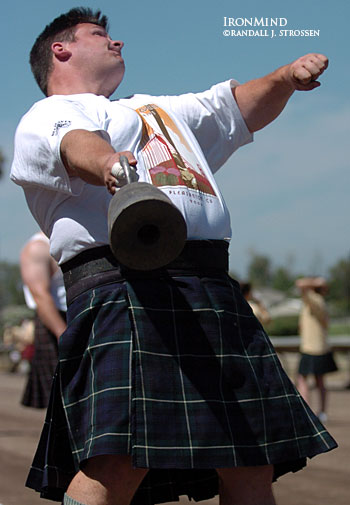 David Brown will have a chance to give the new 56 some airtime at the Pleasanton Highland Games in a few weeks. IronMind® | Randall J. Strossen, Ph.D.

"A lot of these guys are doing 30 - 40 games a year and travel wear and tear, as well as the usual throwing injuries, can take a toll. HB3 and Dave Brown are recovering from torn biceps, and Eric and Andrew are coming back from knee surgery. The rest of the guys should be close to 100%."

Don't think that being banged up is expected to slow down the top guys, though, because Steve's expert prediction is calling for a terrific competition.

"It never ceases to amaze me how tough these guys are, and how often they can 'bring it' on the day of a big Games," Steve said. "With that in mind, I think it will be a great comp with Ryan Vierra once again trying to hold off another group of worthy competitors. Larry Brock is throwing well with a third place finish at the Worlds, and Sean Betz, as usual, is capable of taking top honors anywhere he goes."

"I've ordered a new 56-pound weight for height and it will be interesting to see what these guys can do with it," Steve said. "Dan McKim will be strong in the stones, Jason Johnston was second at the Canadian Championships this year, and if a healthy Eric Frasure shows up, anything could happen."

Hosted by the Caledonian Club of San Francisco, the Pleasanton Highland Games will be celebrating its 142nd birthday this year: