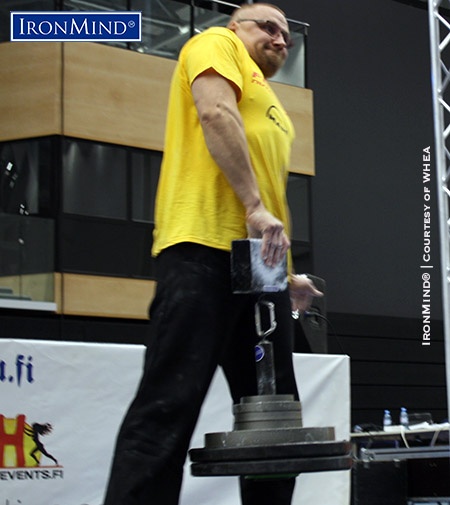 While competing at the US World Grip Championships, Harri Tolonen (Finland) pulled 48.6 kg on the IronMind Block to break the world record and cement his position as the pinch grip king. IronMind® | photo courtesy of WHEA

With 21 athletes in the starting line from several countries the 3rd US World Grip Championships was a success in WHEA´s Pure Power™ event last weekend in Hämeenlinna, Finland.

The competition included 5 events with the rule, that in 4 one arm events, the athlete needed to choose 2 events for left and 2 events for right hand to perform great overall grip strength instead of being ”one arm wonder”.

“The competition started with IronMind´s CoC Silver Bullet, where 5 men managed to make time with Captains of Crush No. 4 gripper- the dominant competitor in this event was Finland´s Jesse Pynnönen, who was just about 3.5 seconds short of the world record as his time stopped to 14.16. On women´s side Rebecca Roberts hit the time of 29.81 with Captains of Crush No. 2 gripper to win in this event. On Rebecca´s case it is notable that she had competed 2 days in strongwoman world championships, finishing last event just 30 minutes before this attempt. There is some spirit!

The competition moved on well and we saw good results in women's IronMind Hub and Block, events with top performances being 20 kg Hub (Roberts, Rytkönen) and Block 27.5 kg (Roberts), while in the men´s class for the IronMind Hub we also saw good lifts of 35 kg by Tolonen etc., but in the IronMind Blockbuster Pinch Grip Block we saw the competition of the century: after 45 kg, four athletes attempted for world record kg´s with 47,6kg (Mähönen, Larsen, Pynnönen and Tolonen), but only Harri Tolonen had the grip to lift it up successfully. While people went mad on the world with tv-cameras zooming on Tolonen, the quiet Finn asked for more and nailed another good lift of 48,6kg!!! You can see the lift here: IronMind Block world record.

The tough competition was finalized with traditional one arm deadlift with a normal bar, in front of the legs. In the women’s class the event was a tie win for Tanner and Roberts, while in men´s class there was big battle for the overall and we witnessed 3 lifts of 190 kg (Larsen, Karppinen, Nikkilä) and the points calculating was very exciting as especially in the open men category we had over 10 men competing, so one mistake caused big drop in point. Jesse Pynnönen had a solid victory in the open class with 17.5 points, followed by Thomas Larsen (NOR) with 22.5 points and Harri Tolonen with 24.0 points.

So, the 2017 edition of US World Grip Championships produced the following champions:

US World Grip Championships is part of WHEA´s Pure Power™ event, where several competitions under anti-doping surveillance are organized under the same roof. The 2018 edition will be held October 13-14, 2018 and athletes who are wanting to compete there must be WHEA members with signed anti-doping contract latest 3 months prior the event or National qualifier if organized in the athletes country.