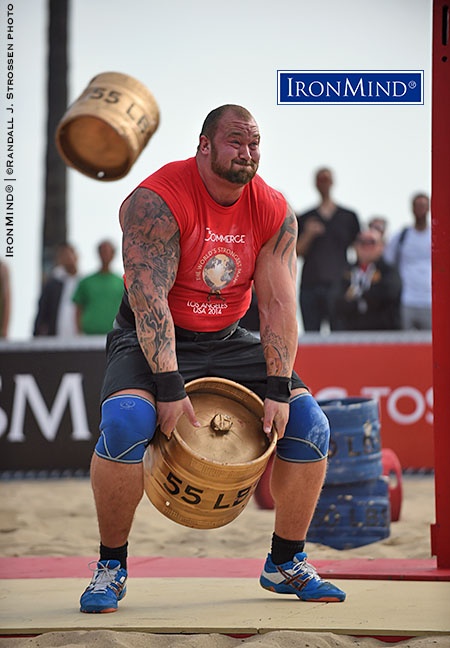 “There are some recent additions to the already exciting show that the Caledonian Club of San Francisco has planned for the upcoming 150th Annual Gathering and Games which will be held on Labor Day weekend in Pleasanton, California.

“First, Bill Anderson, one of the legends of Scottish Heavy Events, has agreed to attend as a guest of honor. Bill will be accompanied by his wife Frances.

“Second, Hafthor Bjornsson ‘The Mountain’ from Game of Thrones fame, will attempt to break his own world record in the 56 lb. weight over bar. There will be a special weight over bar event on Sunday afternoon where Hafthor will challenge the pro line-up from the 2015 World Scottish Heavy Events Championships, which is also contested that weekend in Pleasanton. Among those athletes is Mike Zolkiewicz the world record holder in the traditional Scottish 56 lb. weight over bar (contested as part of an 8-event competition).

“These two giants recently went head to head at the Arnold Sports Festival in March, and in that face off, Hafthor beat Mike, while setting a new world record of 19’ 3”. Mike’s best is 19’ 2”. This is going to be a contest of epic proportions!

“There is one other fact that should be noted, this will be the farewell appearance of our announcer and esteemed colleague David P. Webster, OBE. David has been a mainstay at these games for many years. In fact, David, along with Malcolm Ramsay, past Chieftain of the CCSF, were the people who were responsible for creating the U.S. Open Invitational Scottish Heavy Events Championships, 41 years ago, that was instrumental in bringing these games to a world stage. For this and many other reasons David has been chosen as the Honorary Games Chieftain for the celebration of the Sesquicentennial CCSF Gathering and Games,” said Conway.