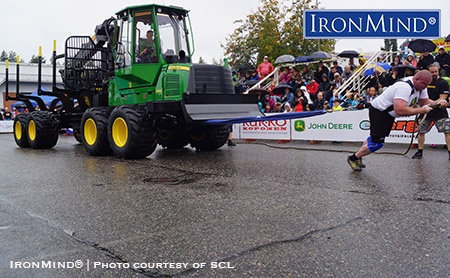 
It was a rainy day in North Carelia, but that did not stop the 2016 SCL Finnish Open, when the Finnish Open. The first event was the Forest Machine pull with harness and rope (20m distance) and only one athlete finished the whole course, Latvian Didzis Zarinis. The Log for reps was next, with a 135-kg log and a 60-second time limit. The winning result was done by three athletes: Didzis Zarinins, Gunnar Gimbutas and Enzo Tauro (Holland), with six lifts.

Heading to the third event, Latvian Dizis Zarinis had a one point lead over Estonian Gunnar Gimbutas. Farmer’s walk (25m) and back Cross Carry (25m) was the third heavy event in the competition. Gunnar Gimbutas won the event and was 10sec faster than second place Antti Mourujärvi. Going to fourth event, Forward Hold with 30kg, Antti Mourujärvi showed that he is one of the best in the world on this event in world. His winning time was 39sec.

Deadlift for reps using Mercedes Vito was the fifth event. The weight lifted was 337kg and there was a 60-second time limit. Jarno Kirselä took an easy win with 10 reps. Second was Phil Roberts (UK) with 8 reps.   The last event was Giant Log Loading: 4 logs loaded on the end of a truck trailer. The Dutchman Enzo Tauro made the fastest time, 24 sec, followed by Gunnar Gimbutas ,25sec, and North Carelian region’s own talent, Arttu Parviainen, 25.5sec.

Even with rain, the arena was full, which made around 2000 people who came to cheer the athletes in SCL Strongman Finnish Open 2016.   Big Thanks to Liperi County and all Company Sponsors who made this first SCL event possible in my home region.