It came in highly touted, described as “the best grip contest in history,” and after two days of having their grip strength tested this way and that—sorting the strong handed from the still stronger handed—there was no shortage of praise for the contest which seemed to have no trouble living up to its advance billing. 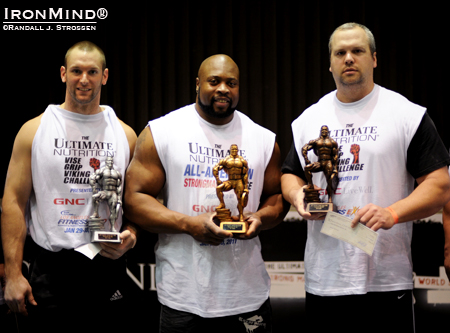 
“It was awesome,” Chad Woodall told IronMind.  Woodall has won just about everything there has been for grip-strength specialists to win on their circuit, and because he also competes in amateur strongman, in many ways he was the perfect person to compete in a contest that bridged the worlds of strongman and grip strength.

“It gave us grip guys a chance to mix it up with the strongest guys in America and the world—let’s you see where you fit in,” said Woodall.

Woodall came in third place overall and won a lot of praise for his performance on the wrist roller, dramatically attached to a giant fishing pole that had to be raised from the floor.

Andrew Durniat, a former All-American lacrosse player who is a contender to break the world record on the double overhand Apollon’s Axle deadlift, echoed these feelings.

“I wanted to try myself out against these guys: It’s fun to play in the kiddy pool, but at some point you have to jump in the deep end.  This was going to be outstanding—that’s why I came out.”

Other than the wrist roller, where he came in fifth, Durniat finished first or second in each event, and his winning performances on the medley and the Inch Dumbbell deadlift for reps were most impressive.

And for the man himself, Mark Felix, a top strongman competitor who also happens to the world record holder on the Rolling Thunder®, what’d he think?

“I liked it—it was good,” said the man who while having some of the strongest hands around is new to grip strength contests.  Incidentally, with a fresh pair of hands, Felix seems to be capable of breaking the Apollon’s Axle double overhand deadlift world record almost at will.

Showing the spirit of the contest and its competitors, Felix was quick to acknowledge how the more experienced grip strength guys had coached him, giving him pointers in terms of technique, things that would help him maximize his performance.

Besides their broader grip contest experience, both Woodall and Durniat are certified on the Captains of Crush No. 3 gripper, and Woodall is certified on the IronMind Red Nail as well, so if Felix were to have tutors, he picked the right pair.

“They helped me,” he said, underlining the good sportsmanship that characterized this competition, but let there be no doubt: Mark Felix walked in with virtually no specialized training and showed that when it comes to having horsepower in the hands, he’s got it covered.

Here are the final points, officially.

Hats off to the LA FitExpo for hosting this grip strength contest and to Odd Haugen for organizing it—can't wait for next year.