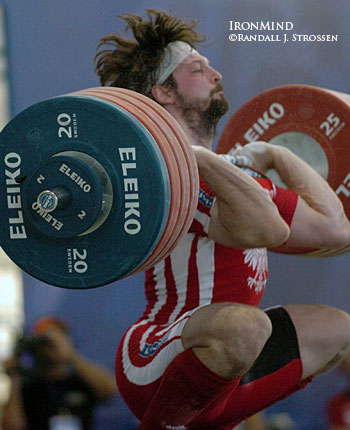 Polish star Szymon Kolecki had to bounce a couple of times before being able to recover with this 219 kg clean in the 94-kg category, but once he stood up with it, he put away the jerk at the 2006 World Weightlifting Championships (Santo Domingo, Dominican Republic). IronMind® | Randall J. Strossen, Ph.D. photo.

"Everything is going according to plan," Grikurovi said. "Arsen [Kasabiev] is healthy and is getting back to his normal condition. [Georgi] Asanidze is training hard to help the team . . . he is not the same Asanidze as a few years ago, but he will make a big contribution to the team."

The 2007 World Weightlifting Championships is an Olympic qualifier, and results there will determine eligibility for the Beijing Olympics.

Asked whether he thought the 94-kg class at the Beijing Olympics would end up being a three-horse race between Szymon Kolecki, Ilya Ilin and Arsen Kasabiev, Grikurovi said, "So far, it will be between Szymon and Ilya . . . ."