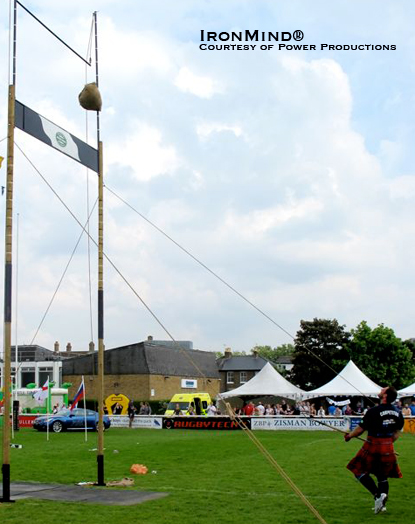 “Gregor Edmunds misses his first attempt at 28' in the sheaf toss - a height he did on his second throw on the way to winning yet another event,” said Colin Bryce.  IronMind® | Courtesy of Power Productions.

The London Scottish Rugby Club International Highland Games show took place in Richmond, London on Saturday and Sunday, June 5 - 6.  The idea, which came from Dr Douglas Edmunds, was a huge success - merging the top Highland Games men in the world and some of the world’s top strongman competitors into one show.  The Highland Games athletes, which included past world champions Sean Betz, Aaron Neighbour and Gregor Edmunds, involved 10 traditional throwing events. The strongman contest, which included Misha Koklyaev, Laurence Shahlaei and the return to strongman of Arild Haugen also took in 10 events.  The final results (from the top 5) were:

In the Highland Games events, Gregor Edmunds, who was considered by many to be a spent force last year, reigned supreme.  He either won or came in the top three in every event - in a contest of the highest standard.  What epitomised the sheer quality at the Games was the result of the light stone where Scott Rider won with a put of 59' 4"; amazingly, Gregor Edmunds took third with a put of 58' 3", a distance that would normally destroy a field of top throwers.

In the strongman, it was Misha Koklyaev who looked on another planet.  The second day started with him completing the greatest lift ever done on British soil in the log lift—190 kg.  What makes the feat even more impressive is that it was done on a cumbersome and awkward wooden log.  It has to be noted that Jimmy Marku made him work for it after equalling Jamie Reeves’ British log record with 185 kg. 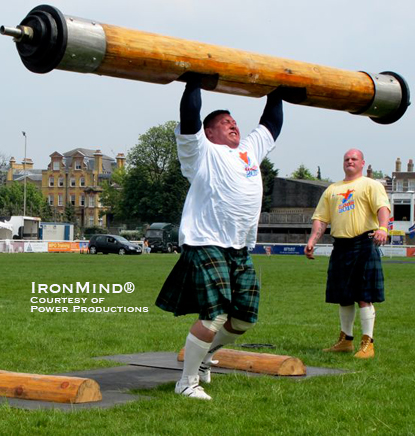 Koklyaev and the strongmen joined the Highland Games throwers for the weight for height where Mike Zolkiewicz, the world record holder, took on Misha Koklyaev - the world record holder at the 25 kg weight for height.  After a fair few rounds both men had done 17' but so too had Arild Haugen at his first attempt.  Misha then went on and did 18' and called for 18' 11" inches and a new world record.  Sadly, the 'good' weight broke and the 'dour' thin-handled weight was brought out.  Amazingly, it didn't faze the great Russian and his four attempts either went in front of the bar or smashed into it. The record wasn't his, but no one was left in any doubt that it will be soon!

Special note needs to go to Laurence Shahlaaei who was on top form all weekend - backing up a great performance in Ukraine, and likewise for Richard Skog who says he will no longer turn up to strongman shows looking like a 'fitness guy' at 150 kg as he is happy sitting at 170 kg. 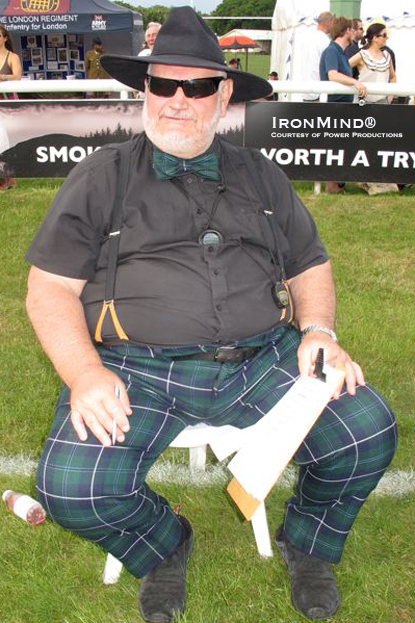