In a storybook setting, Gregor Edmunds held off the charging field and captured the 2009 European Highland Games Championships. 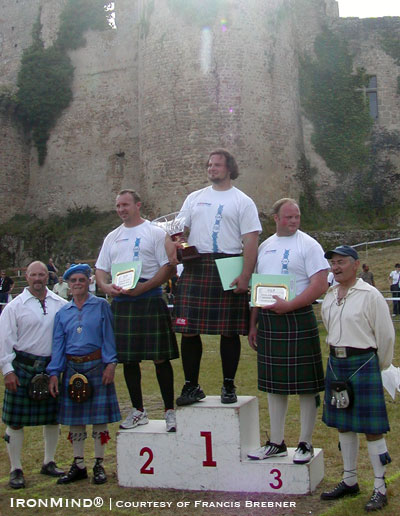 The second day of the European Championships were gifted again with perfect throwing condition with a packed crowd of more than 8,000 spectators.

Opening ceremonies were done once again by the mayor of Bressuire before our group of eager heavies got under way with the 22-lb. Braemar stone.

This was a very tight battle between the athletes right until the end of this event with Gregor Edmunds being the triumphant winner with a put of 39' 6”.  In second place was Tommy De Bruyn from Belgium with 37' 11” and Hans Lolkema from Holland in third with 35' 6”.

In the 16-lb. hammer this once again proved to be a real ding dong battle with Craig Sinclair sealing the win on his last throw for the victory over Edmunds with a distance of 132' 6”, which left Edmunds in second place with 128' 1” and Tommy de Bruyn in third with 122' 7”.

Going into the third event of the day, the 28-lb. weight for distance, it was Craig Sinclair who applied the pressure with a greet opening throw of 76' 10” for the win which left Hans Lolkema in second place with 75' 9” and a surprising Edmunds in third place with 73' 11”.

The 56-lb. weight over the bar had a very interesting outcome with Hans Lolkema dominating with a winning, height of 15' 6”.  In second place was Tommy de Bruyn with a height of 15' and in shared third place were Craig Sinclair and Gregor Edmunds at 14' 6”.

At this point in the competition, with only the caber toss left, the points could not have been closer, with Edmunds in first place with 14.5 points; in second, Sinclair with 16.5; and Lolkema in third, with 17.

The final event was the Bressuire caber which had never been tossed before and at a length of 19' and 135 lb. this was to prove a very difficult stick for many.

Only two athletes were to toss this caber, Edmunds and Lolkema, with both sharing the win with each landing a 12 o'clock toss which pulled Lolkema well up in points to claim the second place over Sinclair.

The final overall point were as follows: