Competing on Saturday at the Halifax Highland Games, Team Canada tuned up the for the International Highland Games Federation (IHGF) World Team Championships. 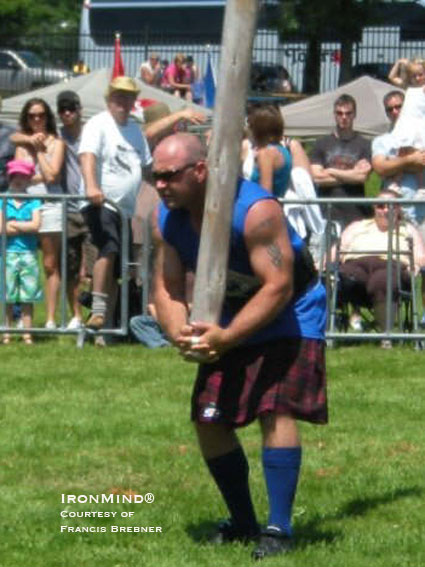 In the last major tune-up before the first-ever IHGF World Team Championships in Antigonish, Nova Scotia, Team Canada took the field at the 45th Halifax Highland Games on June 11.  Team Canada’s Greg Hadley, Matt Doherty, Lyle Barron and Dirk Bishop shared the field with 5 other Eastern Canadian athletes in hopes of working out any last minute kinks ahead of the big show in Antigonish.

The caber toss was an old-fashioned shoot-out, with an implement standing 21’ 6” and weighing a light 100 lb.  Hadley, Barron and Bishop all secured 12:00 throws and finished in that order.

The 56-lb. weight for height was the last event of the day.  In a thrilling contest, Doherty cleared 17’ on a tie-breaker throw for first place, bringing the Halifax crowd of 1,000 to its feet.  Danny Frame, also from Nova Scotia and a true up-and-comer, took three valiant attempts at 17’ but was just short.  His 16’ snagged him second.  Lyle Barron claimed third.

All IHGF athletes will arrive in Antigonish this Wednesday, July 15, for several days of fan activities, sightseeing, and good old-fashioned maritime hospitality.

Here are the top three overall: