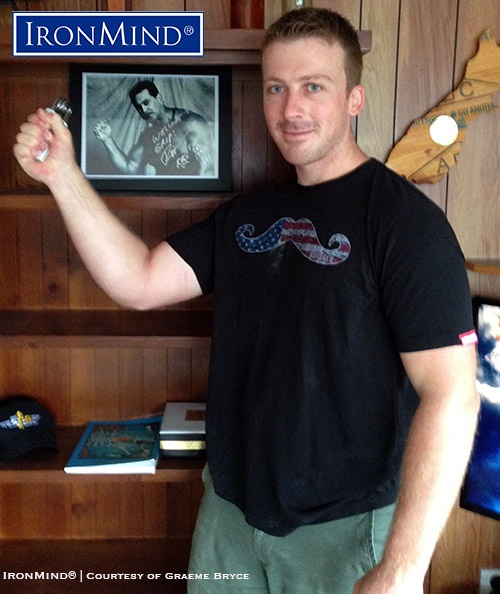 Congratulations to Graeme Bryce, who has just been certified on the Captains of Crush No. 3 gripper, the international benchmark of world class grip strength. IronMind® | Photo courtesy of Graeme Bryce

Congratulations of Graeme Bryce, who has just been certified on the Captains of Crush No. 3 gripper, proving his world class grip strength.

“I first heard about Captains of Crush grippers when a good friend of mine Duncan, told me about them,” Bryce explained to IronMind.

“He told me about a single stamp COC2 [Captains of Crush No. 2 gripper] that he’s had for 14 years and never seen anyone close. He had given it to a lot of ‘strong guys’ but they had no success. Intrigued but this I had to try. My attempt was very close to closing. From then on I had to close it. Two weeks later the gripper was shut and I was hooked on grip.

“I ordered a few COC grippers including a COC3. The day they arrived I closed the COC2.5 out of the pack. This was just three weeks after I closed the COC2. My interest was growing and the COC3 certification became my goal.

“Gym training centred around grip. I bought smooth sided weight plates for pinching and made a plate loadable pinch device. I got an Inch Dumbbell bar made. More grippers were purchased. I started building up my forearms and wrist strength. I even started bending horse shoes and tearing packs of cards. All this was for the sole goal of getting certified on the Captains of Crush 3, in my eyes the international bench mark of solid crushing grip. I learned that no one in New Zealand had ever got certified. This was fuel to be the first one.

“Today I closed a new COC3 under official conditions, and I am over the moon! To be the first to do this is New Zealand is very special to me. I attribute my success to God, for his strength is within me, and I could not do it with out Him. I am very thankful to all those who helped me along the way, especially that team at IronMind, my referee Blair Norwood, and Richard Sorin.

“It has be an amazing road to the COC3 close. Now the COC3.5 looms up as another big challenge,” said Bryce.

Way to go, Graeme—it’s official and your name has been added to the Captains of Crush No. 3 gripper certification list—and many thanks, Blair, for refereeing on Graeme’s official attempt!